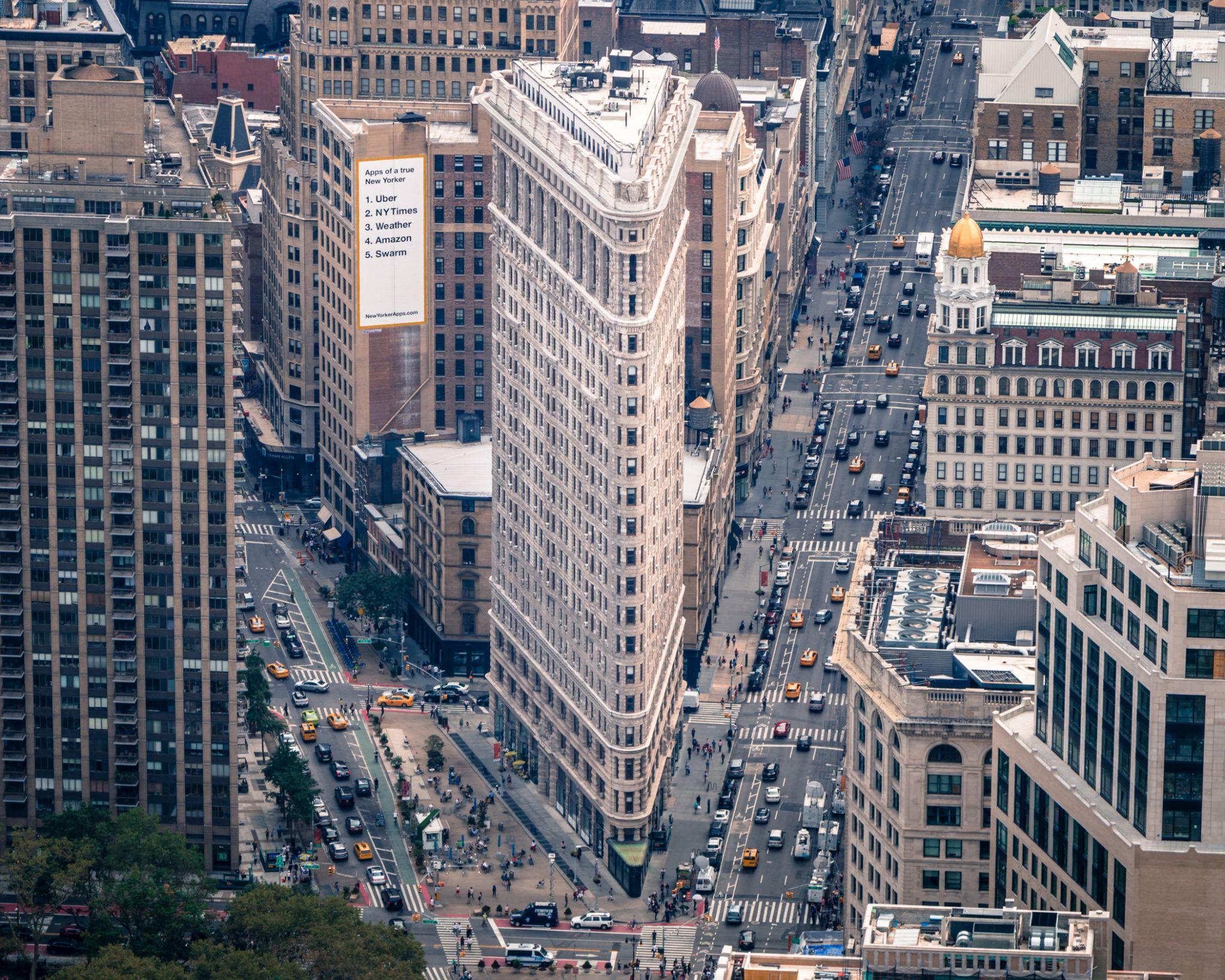 Branded as "monstruous" by The New York Times or a "stingy piece of pie" by The New York Tribune, the Flatiron building, also known as Fuller, was ridiculed by everyone when it was built in 1902. As critics of the time were sure that its triangular shape and location among two major intersections would not withstand strong gusts of wind.

However, over the years, the Flatiron skyscraper has not only managed to stay up, but it has also become one of the most iconic buildings in New York and the United States.

History and origin of the Flatiron skyscraper

The Flatiron skyscraper, officially called the Fuller skyscraper after the name of the client who requested the construction, was commissioned by the company directed by George Allon Fuller, founder of the company with the same name and the largest construction firm in the United States at the time.

The Chicago construction firm commissioned the architect Daniel H Burnham to design its offices in New York. Apart from the Flatiron skyscraper, Fuller had a massive influence on the architecture of New York, since it was the construction firm behind numerous emblematic skyscrapers and buildings including the New York Times Building, the Plaza Hotel and Savoy-Plaza Hotel, which have defined the city's skyline.

The Flatiron building is located at 175 on the famous Fifth Avenue in Manhattan. In 1901, when the construction work on the building began, it was one of the main commercial centers of New York. Skyscrapers were being built across the city to demonstrate the economic power of what was then considered the most elegant street in the city at the beginning of the 20th century.

Although its nickname -Flatiron- is often related to a household iron, it was, in fact, the name given to the triangle block formed by Fifth Avenue, Broadway and East 22nd Street and 23rd Street. 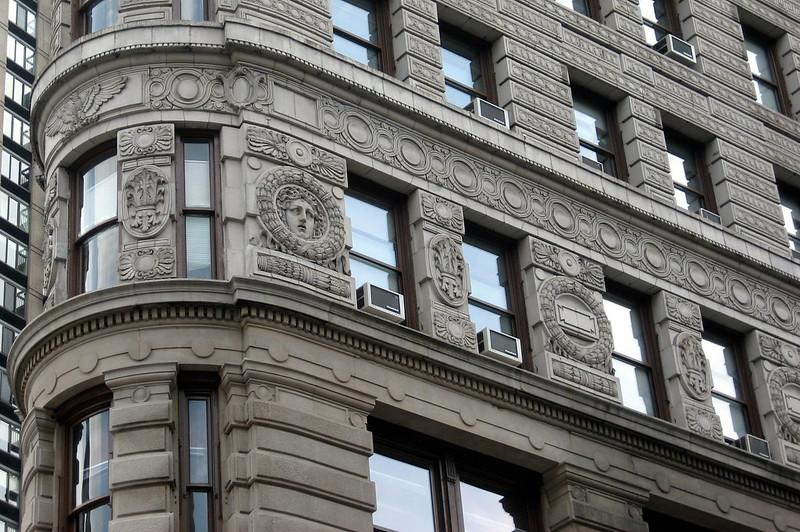 The building's triangular shape is governed by the shape of the aforementioned plot and it presented some challenges, since it is only two meters wide at the point where the two longest sides of the building come together.

The design, created by Daniel H. Burnham, a famous architect who belonged to the Chicago School of Architecture, established the start of the Beaux-Arts movement, a relatively short-lived movement that began in 1895 with buildings characterized by their symmetry and the inclusion of numerous architectural elements, such as balconies, pilasters or balustrades.

Esthetically, there is also an Italian and French renaissance influence. Its structure imitates that of a classic Greek column, since its facade is divided into three elements; base, shaft and capital, with limestone at the bottom changing to glazed terra-cotta as the floors rise.

The vestibule has mosaic floors with ornamental and decorative features. The first 12 floors, with high ceilings, were designed to accommodate art galleries. Lastly, the upper part of the Flatiron skyscraper is built in Art Deco style, with zigzags, stars and sun-like patterns.

The Flatiron building was designated a New York City landmark in 1966, and National Historic Landmark in 1989. 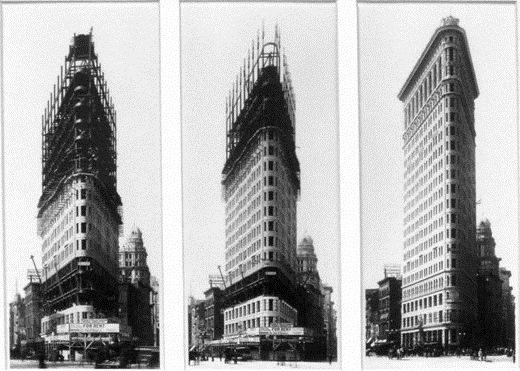 The Flatiron building was one of the first steel-skeleton structure in New York and a reinforced frame with a facade made with limestone and glazed terracotta. An incredible 3,500 tons of steel were used.

The architects used the then-revolutionary curtain wall method. Taking advantage of a change to New York City's building codes in 1892, which eliminated the requirement that masonry be used for fireproofing considerations. This opened the way for other architectural possibilities.

Once construction began in the summer of 1901 the building went up at an amazingly fast pace of one floor a week. All the steel parts were meticulously pre-cut off-site and put together very quickly.

By February 1902 it was complete, and by mid-May the building was half-covered with terracotta tiling. The Manhattan neighborhood watched on in awe as this giant construction game was put together and completed in just one year.

On completion, many leading experts expected the building to blow over in the first strong wind. But Purdy and Henderson, the building's structural engineers, had anticipated this problem: since the building was quite narrow and therefore had less volume to resist wind load they strengthened the structure with steel.

This enabled it to withstand four times the amount of wind force. In 1905, three years after completion, a penthouse level was added at the top of the building as well as a basement, making a total of 22 floors. A retail space at the front of the building was also added in order to maximize the use of the building's lot and generate extra income. 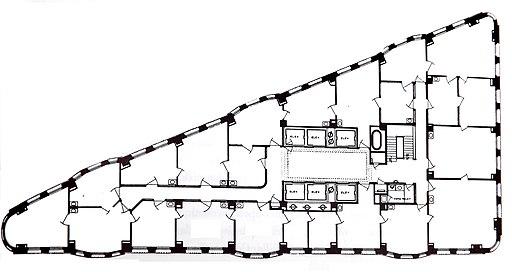 The Flatiron building was never the tallest building in New York and it never intended to be, since its triangular shape was attractive in itself. The 87-meter 22-story building served as the Fuller offices until 1929 and then had a variety of tenants; which included the Imperial Russian Consulate, the crime syndicate Murder Inc. during the Prohibition period in the 1920s-30s and the Macmillan publishers between 1959 and 2004.

Given the triangular shape of the structure, the office space was extremely narrow and difficult to furnish. Tenants described it as a "den" of strange-shaped rooms.

Flatiron in film and television

Its cinema premiere was in 'Bell, Book and Candle' in 1958 and with James Stewart and Kim Novak starring in a romantic scene that took place on the building rooftop. Today, the Flatiron building is often used in TV commercials and documentaries as it is an easily recognizable symbol of the city.

It features in the opening credits of the Late Show with David Letterman or during scene transitions in the TV sitcoms 'Friends', 'Spin City'. It was "partially destroyed" in the movie 'Godzilla' in 1998, and it was used for the 'Daily Bugle' offices, where Peter Parker works as a freelance photographer, in Sam Raimi's 'Spider-Man' trilogy and Channel 6 News headquarters where April O'Neil works in the 'Teenage Mutant Ninja Turtles' TV series