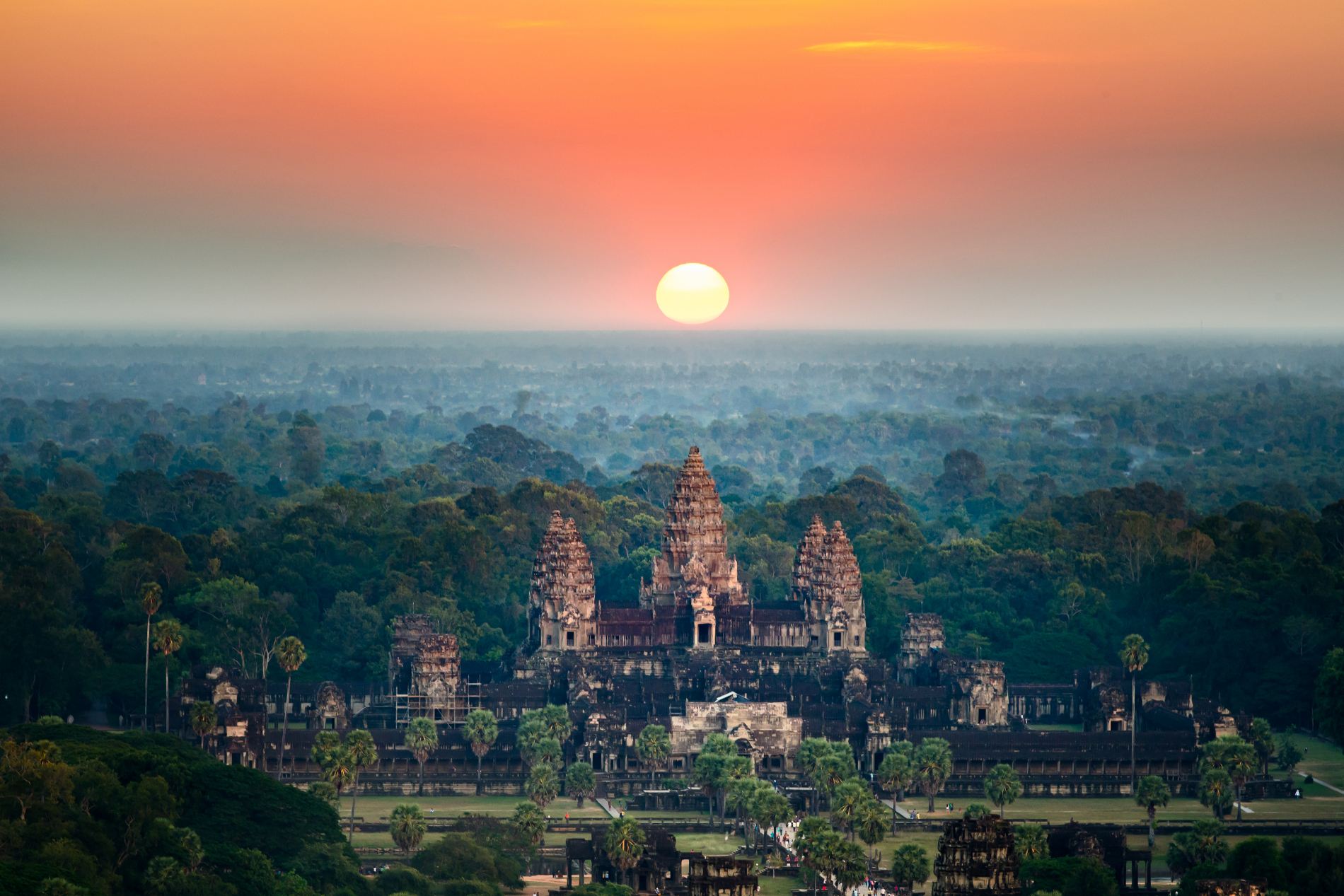 More than one thousand years ago, the Khmer Empire dominated Southeast Asia. It occupied what is now Cambodia and Laos, a large part of Thailand, a bit of Vietnam and just a little (but not much) of the Xishuangbanna Autonomous Prefecture (China). Its religious center, Angkor, with temple-cities such as Angkor Wat and Angkor Thom, had an advanced level of hydraulic engineering. They can be considered one of oldest smart cities of civilization.

History of the 'lost' city of Angkor 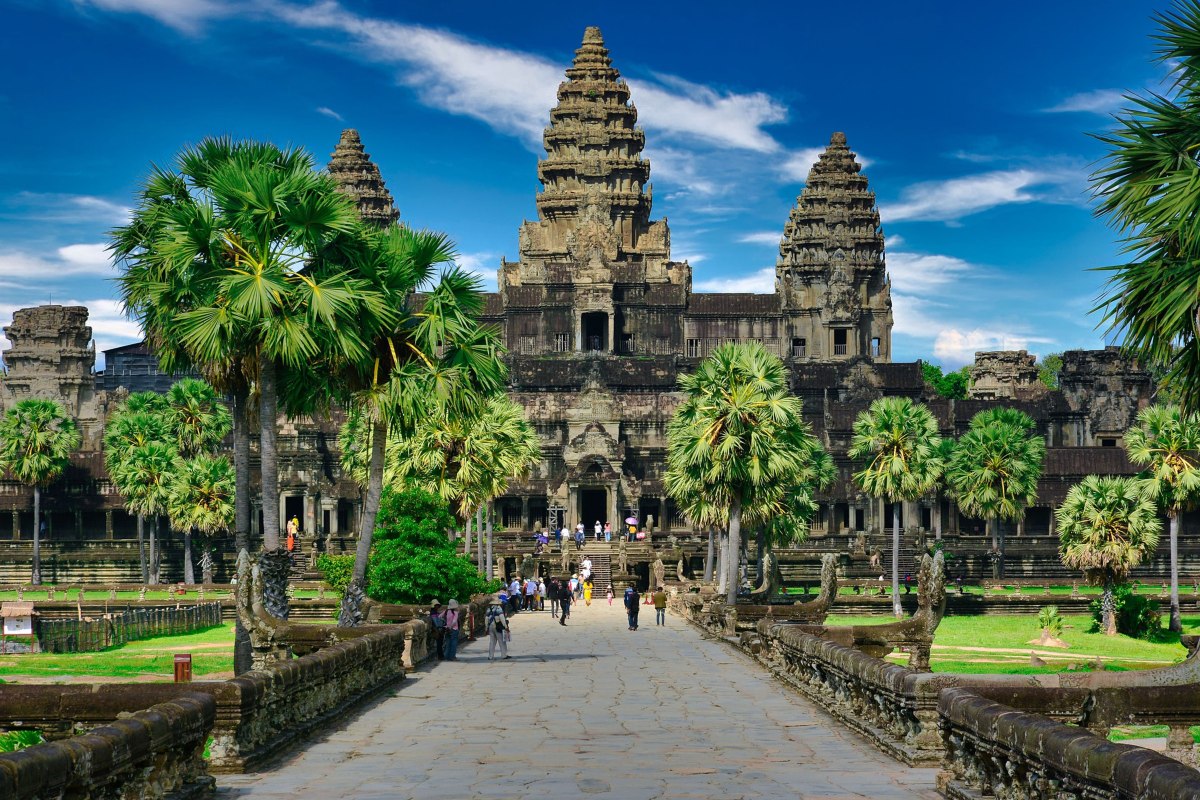 The western error about the lost city of Angkor began in 1860. While searching for butterflies, the French naturalist, Henri Mouhot, unwittingly found the temple of Angkor Wat. Seeing that the temple was mostly covered by weeds and that it had practically been engulfed by vegetation, he decided that it must have been abandoned since the fall of the empire that built it. Needless to say, that was not the case. Since its decline in the 14^th^ century, the temple had been occupied by Theravada Buddhist monks.

Over the centuries, these monks reformed numerous temples, adapting them from Hinduism and Buddhism and they lived there until they were thrown out by the French. The West rediscovered Angkor, but the local population had never forgotten the 'complexes', which are made up of various temples from the Khmer Empire (including the temple of Angkor Wat and Angkor Thom), a dozen Buddhist and Hinduist temples built on previous temples and some baray, which are enormous open-air water reservoirs.

How old is the Cambodian civilization?

In 1953, Cambodia gained independence from France, which had occupied the country since 1863, controlling the indigenous population. Three centuries before, the Khmer Empire was collapsing, leading to a region that was as fragmented as it had been prior to the 9^th^ century, when king Jayavarman II(770--835 A.D.) declared himself chakravartin (literally, "universal ruler") in 802 A.D. and began to conquer everything.

This benevolent king, who thought that he was the incarnation of Shiva, claimed as much land as possible throughout his life. He began building temples in honor of himself (like the pharaohs), often on existing temples. This tradition was happily followed by his heirs. Angkor Wat and Angkor Thom are two of the most relevant temples.

Who built the cities of Angkor?

The Angkor Wat complex, which was rediscovered by Henri Mouhot and which was taken from the Buddhist monks, already existed as a dozen scattered temples. But it was Suryavarman II (1113-1145/1150 A.D.), who actually thought he was the God Vishnu, who made it what it is today. He renovated it all in honor of Vishnu, i.e., himself, although he added some interesting engineering touches that are still studied today.

Angkor Thom, located just one kilometer to the north, was the work of Jayavarman VII (who ruled from 1150 and 1160 A.D.) Unlike his predecessor, he was a Buddhist. Like Angkor Wat, Angkor Thom was enclosed by walls and surrounded by water as a defense mechanism. The main palace dates back to Suryavarman I (king from 1006 to 1050 A.D.), who in turn had reformed a previous temple. Although the main features of this city are the large baray or water collectors, which supplied the city until the Cham forces conquered it in the 12^th^ century.

This was the map of the Angkor Empire 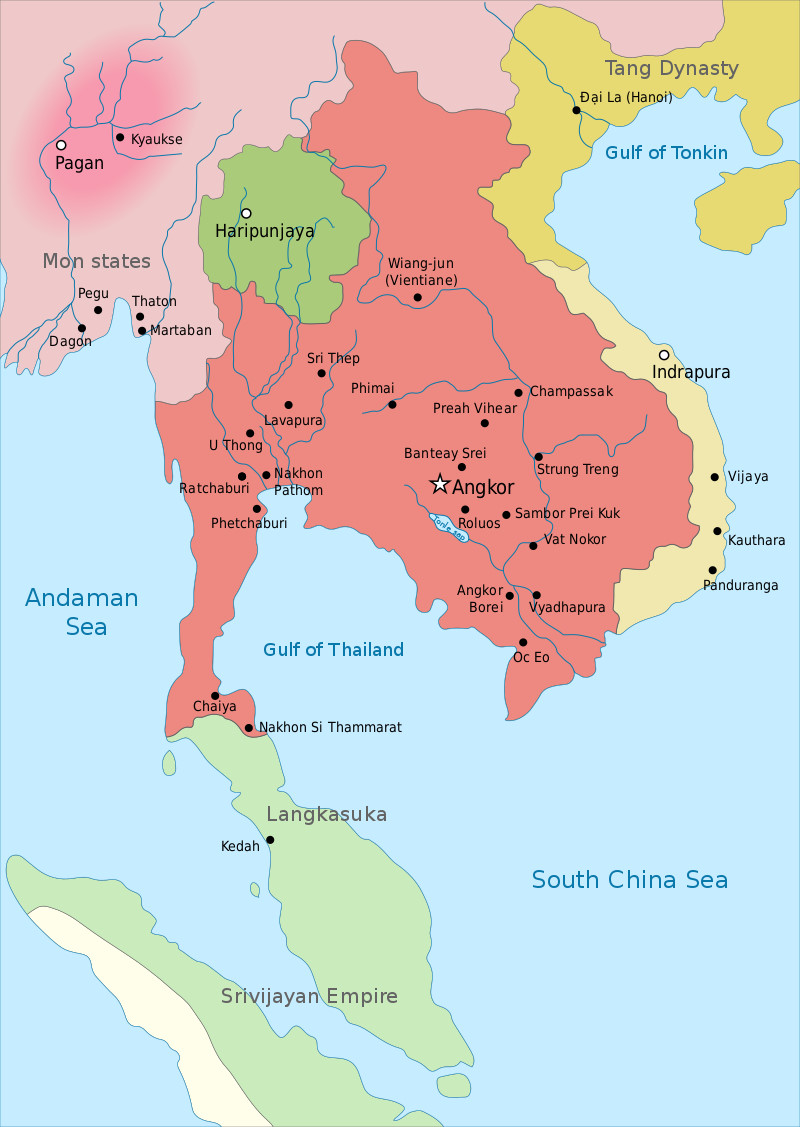 As illustrated on the map of Southeast Asia in 900 B.C., the Angkor Empire (red) extended across an area currently occupied by Cambodia and neighboring regions. For centuries it was the main military and commercial power of the region, with Angkor in the center.

The map below, from the official website taken from the Ministry of Tourism of Cambodia, shows a local map of the cities of Angkor Wat and Angkor Thom. This illustrates the straight lines and the grid system used for the construction of both the cities and the temples, together with the roads and the baray. Each of these enormous water reservoirs cover a much larger area than the city itself. 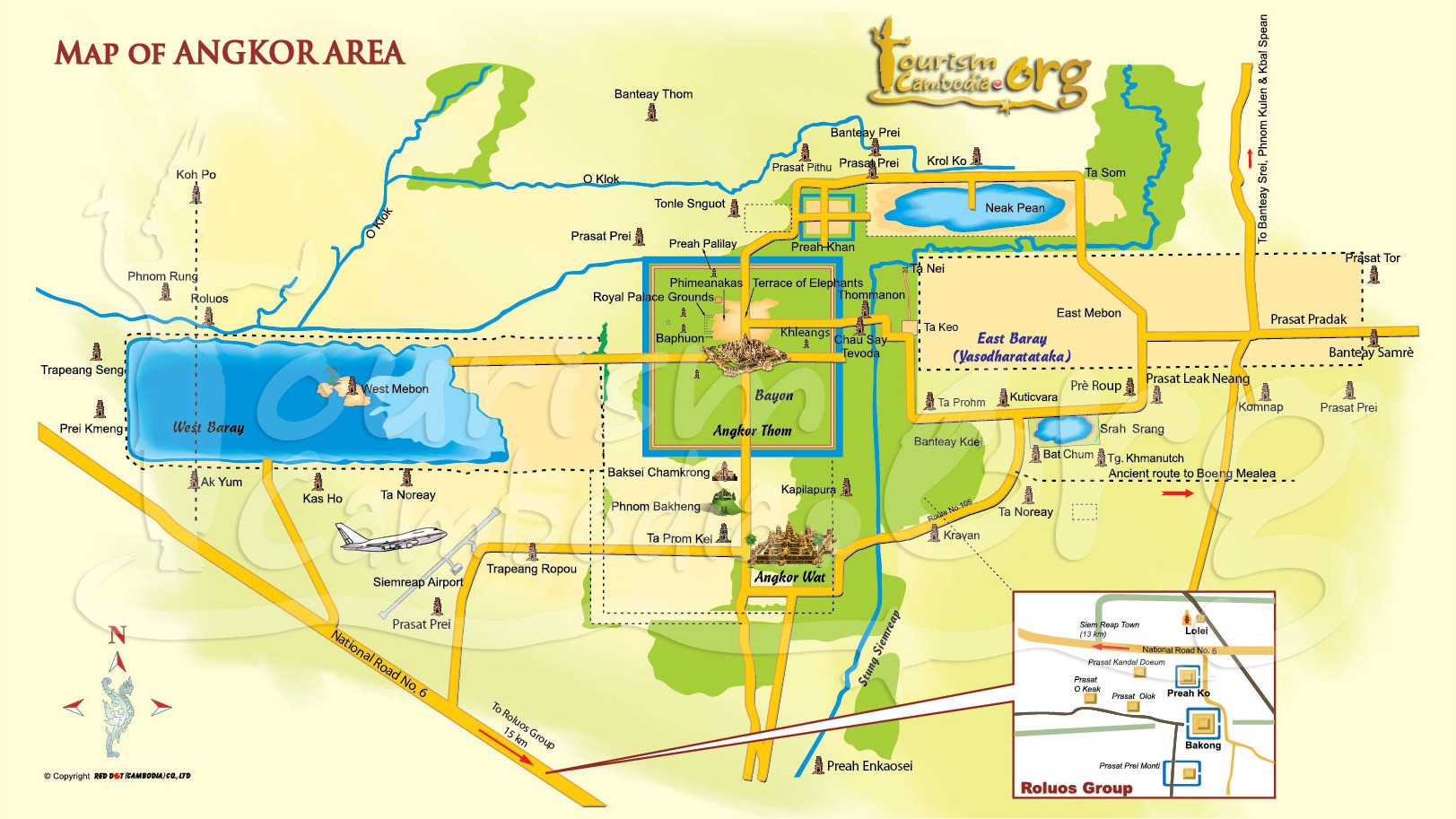 With the aim of preserving such a precious resource as water, both the Khmer Empire and its ancestors and predecessors built enormous open-air water reservoirs called baray. Just a few meters deep (sometimes less), these reservoirs were connected to the city's complex water network and supplied the agricultural land and the cities with water.

There were four major baray in this region, plus a few smaller ones, all built to "substantiate the king's ability to control the water", according to reports. Remember, they believed they were gods. The map below shows the West Baray and the East Baray of Angkor Thom, together with other smaller ones. As illustrated, the water network reached not only Angkor Wat, but also a dozen other cities and temples, which no longer exist. 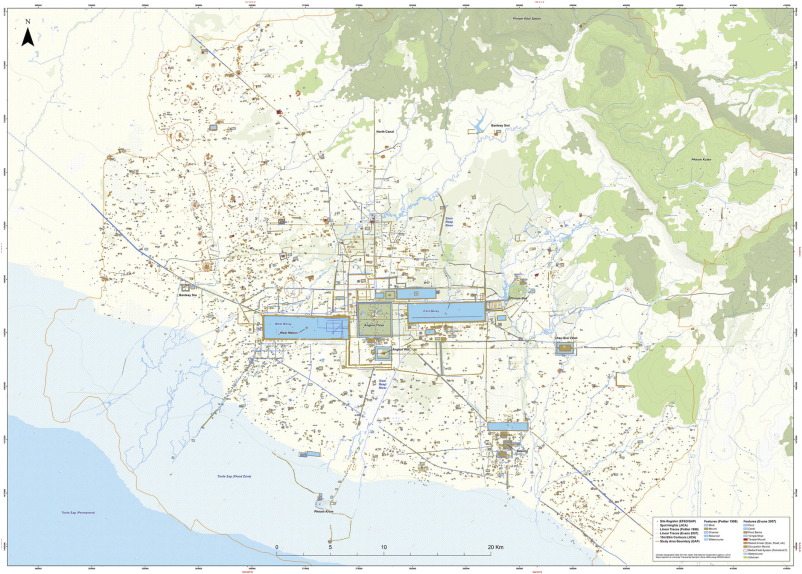 The map above shows small regions of dry land in the center of each baray. These are central platforms called Mebon often accessible via a semi-submerged road. Although the general access was by boat, which is why the Mebon has a small jetty. The Mebon tends to have temples dedicated to gods such as Shiva or Vishnu. 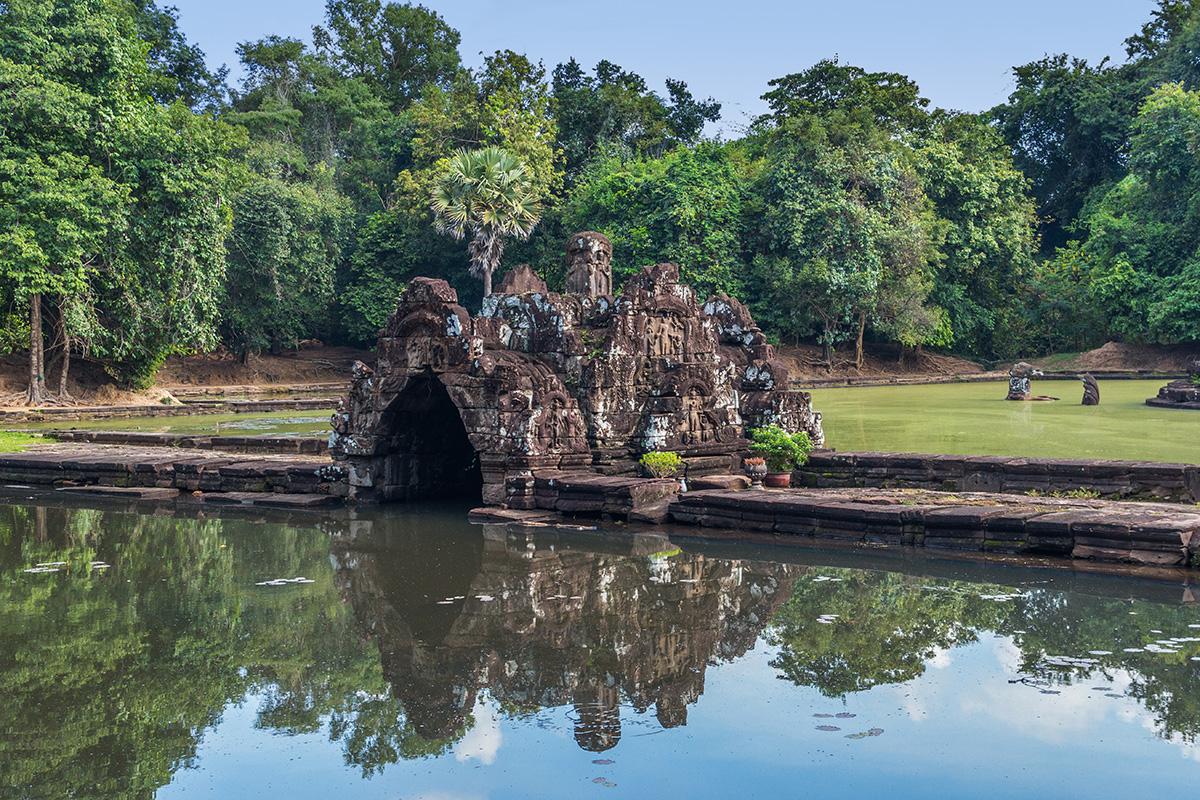 Although there was a time when this water system was thought to have been built during the latter stages of the empire, the truth is that it was developed over centuries. Long before the Khmer Empire, some of these channels already existed in the area. Each king added a few more kilometers and new reservoirs or extended existing ones. The amount of work required to carve just one of these baray was enormous.

We know that a number of these baray were abandoned after floods or faults in the dikes. And the same happened with many temples that no longer stand today. What is undeniable is that the efficient management of water was an enormous asset for the Khmer Empire for controlling the region.

Without its vast network of water, it would have been impossible to supply the growing empire. Not only the temples and places of worship were connected to the baray. Farmland and public fountains depended on these 'surface aquifers' which, for centuries, were a state-of-the-art technology for managing water. A true smart city of the era.