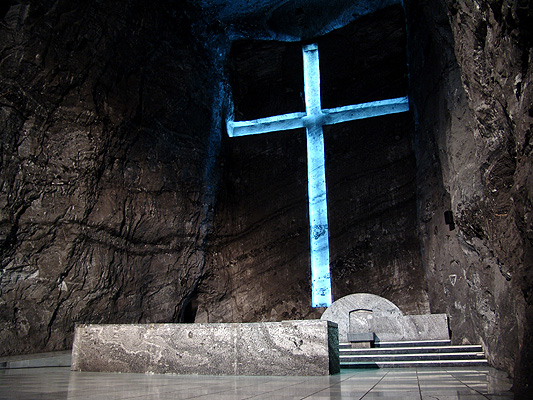 The story behind the Salt Cathedral of Zipaquirá in Colombia pulls at the heart strings. In such a dangerous profession like mining, miners would embrace the power of faith and, during the 1930s, they placed images of saints in the holes in the walls of this underground Colombian mine.

Inspired by this image, Luis Ángel Arango, the general director of the Banco de la República, commissioned the construction of an underground chapelin 1950, which remained open until 1992 and, due to structural deficiencies, was replaced by the existing underground Salt Cathedral.

Its location is also distinctive since it is built within the tunnels of a salt mine. Both the size of its structure and all the details that form part of it are spectacular, making it undoubtedly, the most unique underground religious temple in the world.

What is the Salt Cathedral of Zipaquirá?

The Salt Cathedral is the star attraction of the Parque de la Sal (Salt Park), a nature reserve displaying the geology and the traditions of salt mining, located in Zipaquirá, 48 kilometers from Bogotá. The Colombian salt cathedral is carved entirely out of salt 180 meters underground, and with a capacity for 10,000 people mass and weddings are held there.

The construction replaced the previous salt chapel and was the result of a tender organized by the Colombian Society of Architects in 1990. The winner, from among the 44 candidates, was Roswell Garavito Pearl, assisted by the engineer Jorge Enrique Castelblanco. The construction was financed with part of the money collected from ticket sales to visit the previous underground church and lasted four years. The new Salt Cathedral was inaugurated by Ernesto Samper, who was President of Colombia in 1995.

The Way of the Cross

The entrance tunnel to the underground cathedral. Its altars carved into the salt rock represent scenes from the procession to calvary.

Standing 11 meters tall and with a diameter of 8 meters, it symbolizes the world and the cosmos, the union between the earth and the sky. 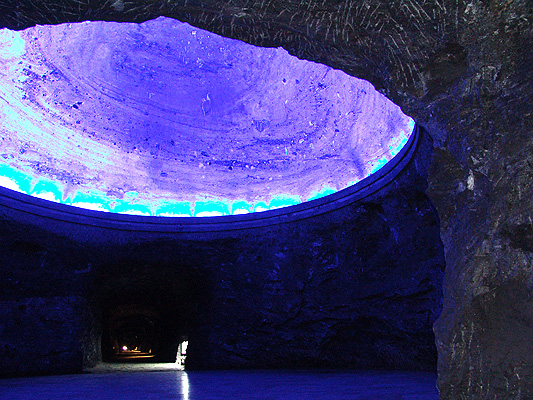 Made up of a series of carved parallelepipeds creating a labyrinth representing the path to be taken by those who were not christened as an act of penance.

Nave depicting the birth of Jesus

Made up of a circular space where the baptistery, the baptismal font and the crystalline salt waterfall symbolizing the Jordan River are located**.** It is 73 meters long, 16 meters tall and 10 meters wide.

This symbolizes the pillars of the Christian Faith, supported by four columns representing the four evangelists. It is also home to a 16-meter tall cross and the medallion of creation, symbolizing the birth of Jesus. It can hold 900 people.

Nave of death and resurrection

It has sculptural works representing the end of the earthly life of Jesus, the chapel of the blessed and the grottos of resurrection. 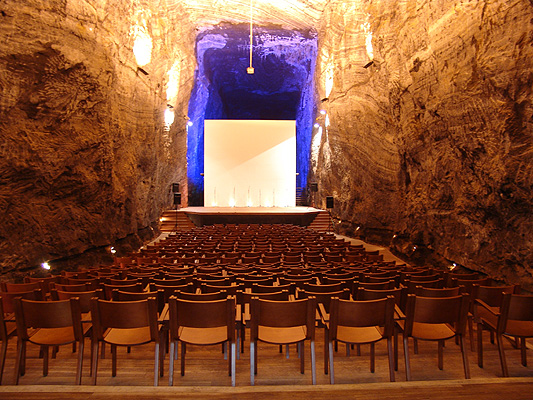 Why is the Salt Cathedral of Zipaquirá so special?

Winner of the contest held in 2007 to designate the seven wonders ofColombia, the salt deposits from the Mountains of Zipaquirá are 200 million years old. Archeological evidence indicates that during the Pre-Columbian era, before the arrival of the Spanish, it was already being used as a salt mine.

During the 20th century, mining activities were conducted between 1900 and 1940, a decade before the construction of the old underground cathedral dedicated to Our Lady of the Rosary, patron saint of miners.

The Salt Cathedral of Zipaquirá is an important example of stereotomic architecture (carving away at stones and other materials for use in construction). The volumetry generated by the reliefs and sculptures, together with the lighting effects projected in all the spaces, make it unique in the world.

A 'salt' construction that has a precedent 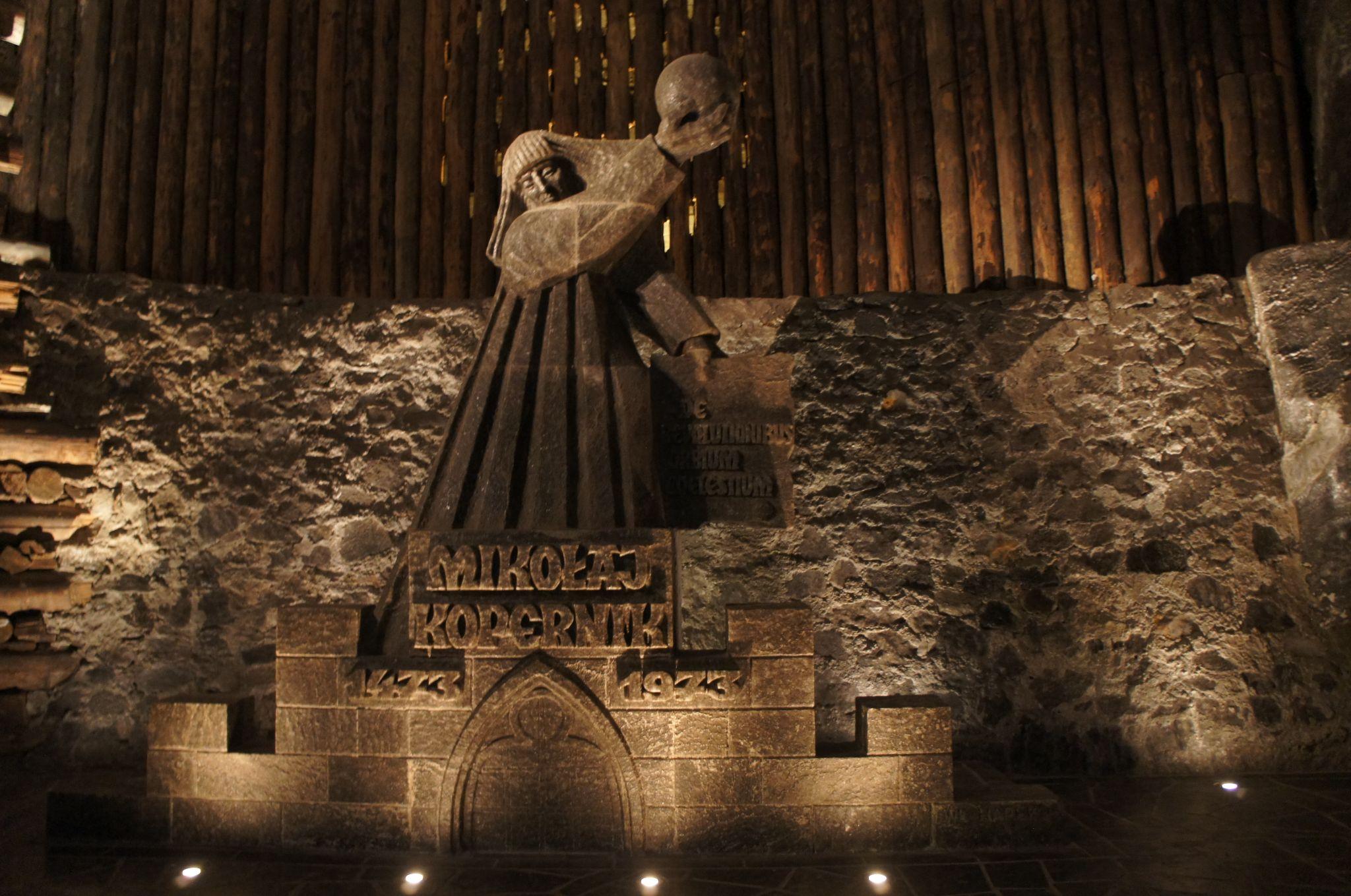 The Royal Salt Mines of Wieliczka in Poland are undoubtedly the world's other famous underground salt-carved construction. A World Heritage Site since 1978, the mine was first worked in the 13th century. Initially mined by royalty, the money obtained from the sale of salt was used, among others, to build and refurbish churches and houses in the town.

The depth of the Wieliczka salt mine is greater than that of the Zipaquirá mine, 327 meters and 3.5 kilometers of galleries containing 22 chambers with underground lakes, ancient machinery and sculptures and low reliefs made by the miners themselves working the mine. It includes sculptures of famous characters and scenes, such as the Polish King Casimir III the Great or a reproduction of Leonardo Da Vinci's 'The Last Supper.'

St Kinga's Chapel is its most magical space. It is 54-meter long room decorated with great detail. Even elements such as furniture and decorative items like candelabras and altars are sculpted with rock salt. The Royal Salt Mines of Wieliczka are one of the star attractions of Poland, with over 800,000 visitors each year.