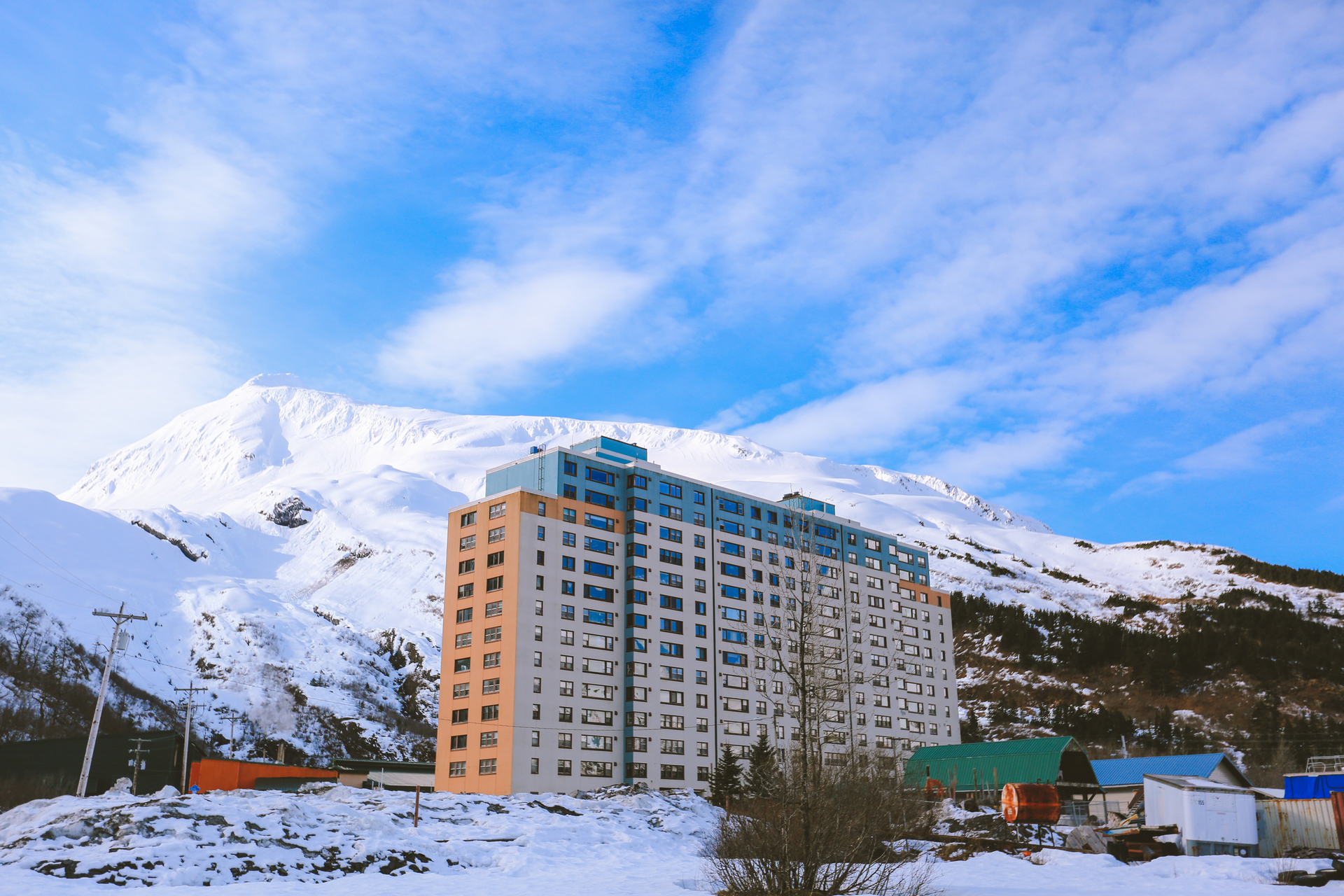 A town that lives in one building or a building in which an entire town lives. The story of the town of Whittier and the Begich Towers condominium is, at the very least, unique. The 14-story building is home to a church and even the mayor's office and its history is related to the army.

Could this peculiar case be an example of extreme, yet, well understood, urban density? 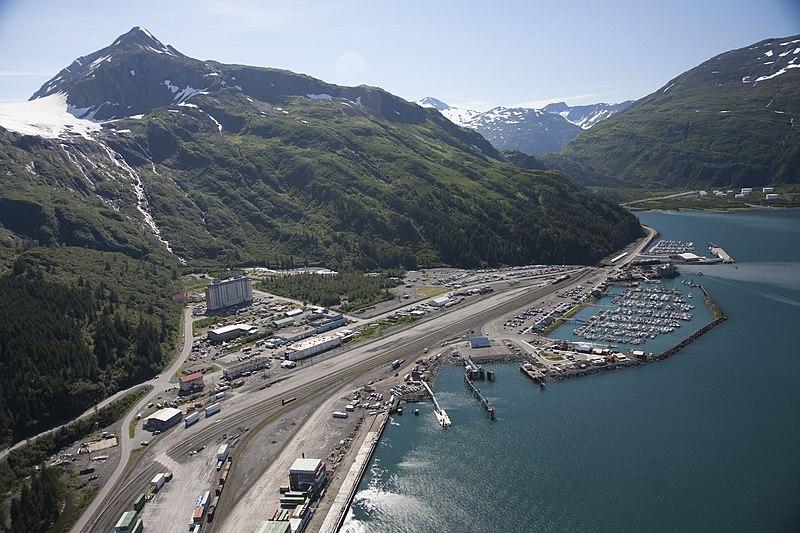 The story of Whittier, located in Southern Alaska, began after World War II and it has literary shades, including its name. In 1941, Simon Bolivar Buckner Jr, Commanding General of Alaska's Defense Command, was looking for a place to build a secret military facility to transport troops and cargo to Anchorage and Fairbanks, where they were building aerodromes and strategic military facilities.

Whittier fulfilled three requirements: access to an ice-free deep-water port, natural protection against air attacks and a topography that was radar unfriendly.

The military detachment was christened H-12 and it accommodated over 1,200 people. Its existence was kept secret: civilians and photographers were not allowed to enter. Apart from barracks, it had a dining area, theater or chapel, all built from wood and railway infrastructures and a port.

When the war ended in 1945, the dismantling of the infrastructure was planned. However, there was an about-turn: the beginning of the Cold War with the Soviet Union in 1947, led the U.S. army to decide to strengthen the military unit. Plans were put in place to house over 1,000 members of the army in the so-called "city under one roof".

The result was the construction of the six-story Buckner building, with its own bowling alley and even a prison. In 1957, the 14-story Hodge building was constructed, designed to accommodate even more military personnel.

The military withdrawal began in 1964, when an earthquake caused significant damage to the port and railway. While the Hodge building (re-named the Begich Tower) continued to be used, the Buckner was abandoned.

It adopted the name of Whittier at the end of the war, in honor of the 19th century American poet John Greenleaf Whittier.

Why just one building? 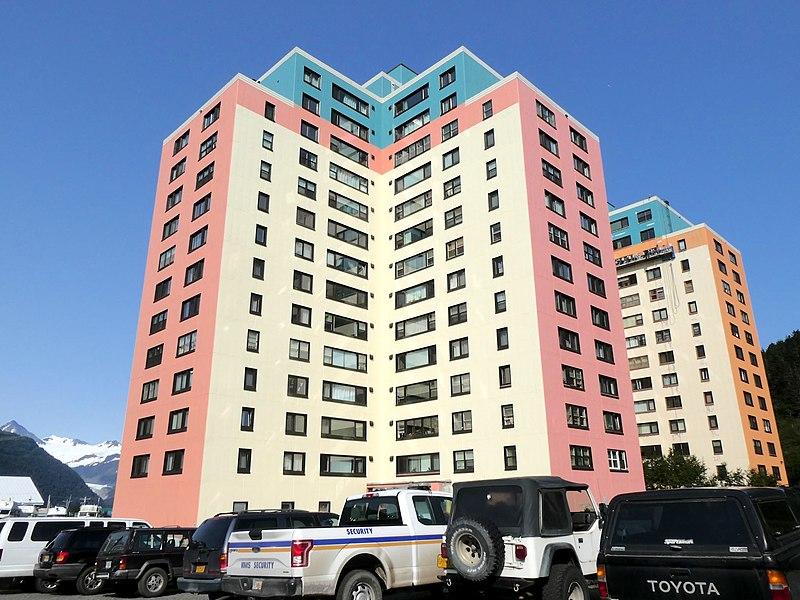 In 1973, the residents of Whittier voted in favor of purchasing the military facilities that included the entire main area of Whittier and the Begich towers, then called Hodge.

Today, the town has 214 residents, 180 of whom live in the towers. The rest live in Whittier Manor, with 80 apartments. Since the abrupt drop in population during the 1960s, when the military personnel left, the population has remained relatively stable, with slight signs of growth.

In an interview, some tower residents argue that the weather conditions of Whittier (winds of up to 96 km/h, 6 meters of snow and average temperatures of -21 ºC in winter) justify that peculiar and sought-after confinement.

The Begich towers, a colossal building of little architectural interest, is made up of three interconnected modules, each with 14 floors.

The towers are made up of 197 apartments, located on the upper floors. Three floors accommodate shopping areas and offices and there is a small medical clinic on the third floor, for example.

Other typical services seen in any town are a post office, a grocery store, the police department and the mayor's office. It also has its own small Methodist church, a laundromat and a hotel on the 13th and 14th floors.

For the approximately 50 children, the building is connected to a school via an underground tunnel. The network of corridors and elevators connect the entire building.

Disadvantages of living in Whittier

The residents themselves mention some disadvantages of this peculiar building, including:

The functional nature of the tower

The Begich towers are practically the same as those built in 1954, in a style that was not designed to house civilians. The metal wardrobes and original countertops still remain in place, together with the green military color.

...And one of them broke. They had to be replaced and a third one was added, as part of a $3 million grant from the U.S. Department of Agriculture to give the towers a facelift.

The Alaskan buildings bring to life what architects like Le Corbusier or Frank Lloyd Wright imagined. The housing units of the former and the Utopian design of the skyscraper The Illinois of the latter sought, precisely, to compact various programs into a single building.

The most recent De Rotterdam skyscraper complex by Rem Koolhaas, which has residences, offices, a hotel and restaurant, does not reach Whittier's 'whole city' goal either. Is it the solution to urban density? Some people defend that it is actually an example of arcology.

The main access is by road, crossing the Anton Anderson Memorial Tunnel, a mixed tunnel (vehicles and rail), which passes under Maynard Mountain. It has two interesting features. On the one hand, with 4 km, it is the longest in North America. The second, it is a one-lane tunnel and trains only move through the tunnel in one direction at a time therefore, the journey between Bear Valley and Whittier and vice versa is regulated with a series of times.

In summer, Whittier changes. Between May and September, cruise ships stop there for two and three days of the week to enjoy the glaciers and the nature in the area. In 2016, according to the most recent figures available, up to 129,894 passengers arrived by this mode of transport.