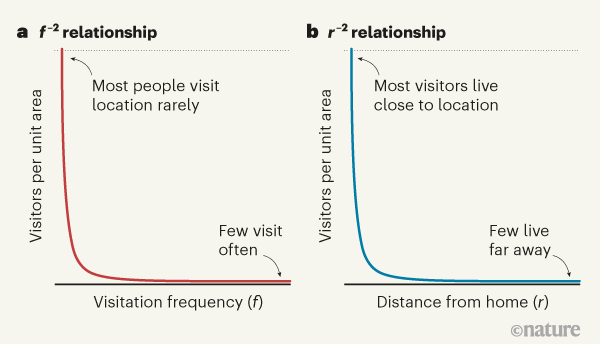 As a scientist, you sometimes come across a finding that is clear and robust, revealing a pattern that was right in front of you all along — and which makes you want to kick yourself for not noticing it before. The universal visitation law of human mobility, reported in Nature by Schläpfer et al.1, is just such a finding. The authors uncover a pattern of human behaviour that connects travel distance to the frequency of trips.

Consider any two places. Can we predict how many people travel from one to the other, and vice versa, on the basis of the position and simple characteristics of the two locations? This question is at the core of a large body of literature whose origin dates back to the mid-nineteenth century. In 1885, the geographer Ernst Ravenstein showed empirically that two key elements explain the number of individuals who move between any two places2: the distance between the places, and the socio-economic properties of the origin and destination. The number of travellers tends to decrease with distance, for example, and more-populated places attract more travellers.