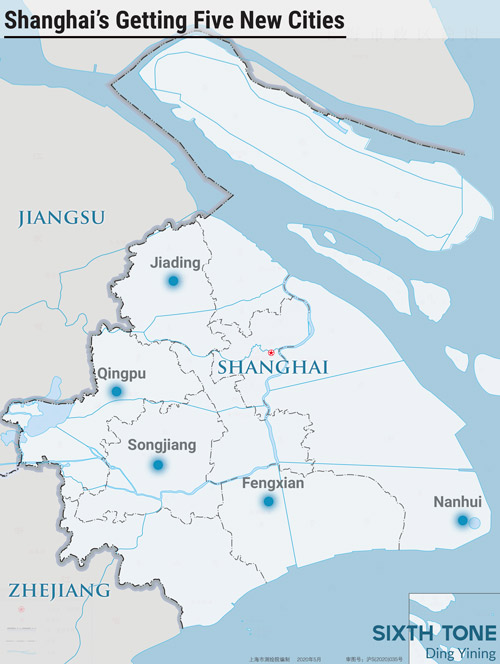 This January, Shanghai mayor Gong Zheng announced that Shanghai’s days as a unified city were numbered. Instead of one sprawling city covering the entire municipality, Shanghai is planning to build five new cities within its boundaries, as the suburban districts of Jiading, Songjiang, Qingpu, Fengxian, and Nanhui are turned into what Gong termed “comprehensive node cities with radiating and driving functions.”

Gong’s speech marked the first time this plan had ever been included in a Shanghai municipal government work report, and it represents the latest step in Shanghai’s efforts to balance the needs of its growing population with its hard space constraints.

The terminology of Chinese urbanism can be complex, but it’s important to note that Gong’s “new cities” are not the same thing as more commonly used terms like “urban subcenters” or “satellite cities.” Urban subcenters exist in fixed relationships to a city’s “downtown.” That is, they are still part of the same city. For example, Shanghai has set up urban subcenters in its northeast with Wujiaochang and in its east with Huamu, which both remain oriented toward the city’s downtown.

The concept of “satellite cities,” meanwhile, is not limited by municipal or even provincial boundaries. The cities of Kunshan and Taicang in neighboring Jiangsu province could be considered satellites of Shanghai, despite being administratively separate.