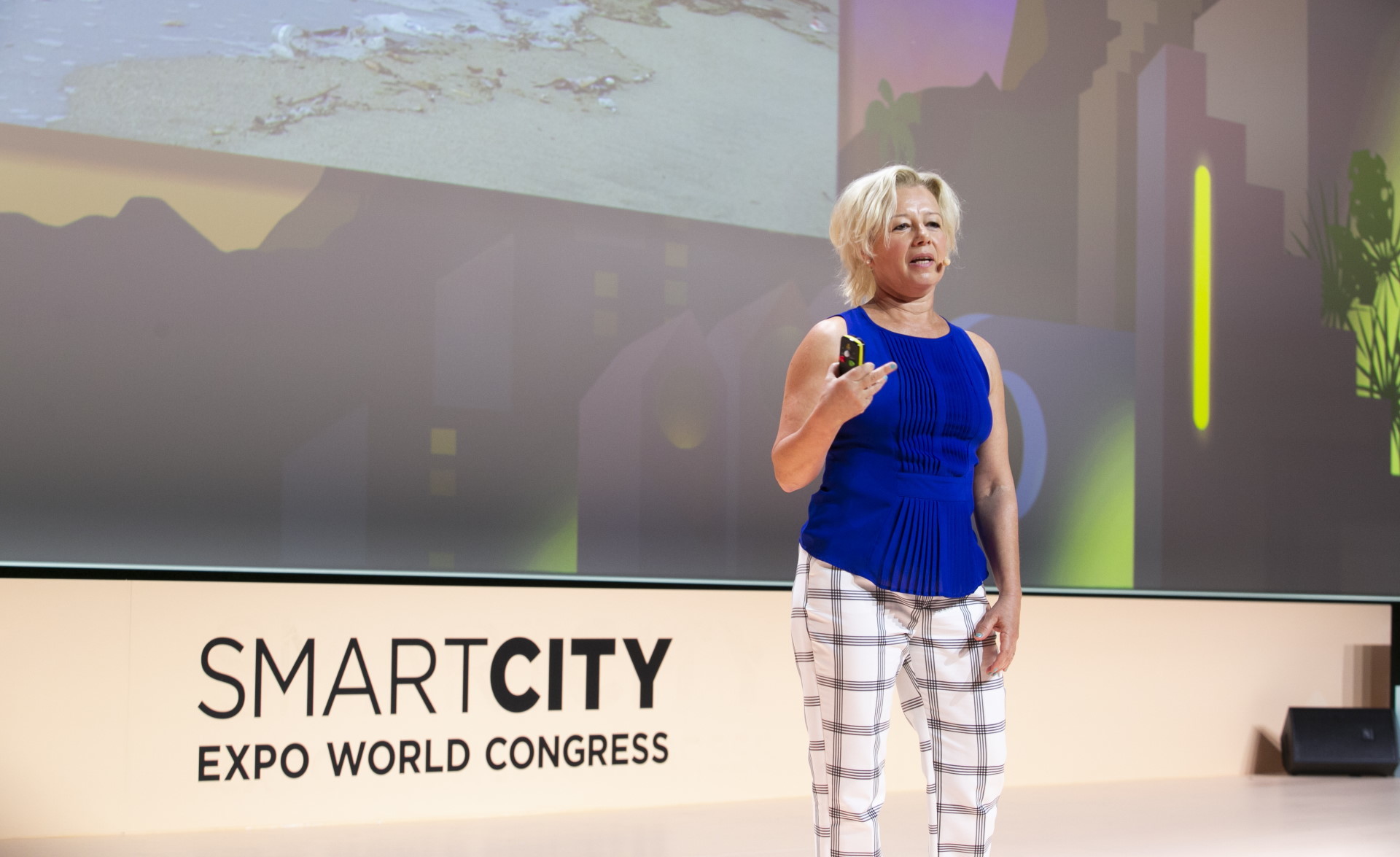 Laura Faye Tenenbaum is a member of the Earth Science Communications Team at NASA's Jet Propulsion Laboratory and an award-winning scientific communicator. Her areas of expertise are climate and oceanography; two areas she explored from the context of city resilience during her intervention in the Smart City Expo World Congress 2019.

Urban resilience comprises numerous factors and areas, including climate change. How can cities become more resilient to combat this phenomenon?

I suppose it depends on the city and its geographic location. Some cities have to deal with heatwaves, others with forest fires, others with rising sea levels…Let’s focus on fire. There is something known as the wildland-urban interface. People have migrated to areas very close to forests and this can cause serious problems. Creating a barrier using simple techniques such as using fireproof roofs can improve resilience. In terms of flooding, people are going to have to move inland at some point.The city of New York is planning how to cope when flooding reaches urban areas; barriers can be erected in some areas, but what if there is a river like the Hudson? You cannot create a wall, therefore, one of the ideas is to tackle the ocean by building in the ocean. What am I going to save? What am I going to lose? These are decisions that are already being made. And the same could happen with Barcelona. What am I going to leave to the sea? Where am I going to fight against it?When there are extreme climate events that cause water levels to rise, such as a cyclone or a tidal wave, these areas will be protected. Others… Places such as the south of Florida, Bangladesh, some islands… Ultimately, people in these areas will have to move.

We have recently gone from speaking of climate change to climate crisis. Do you agree with this notion? Are we experiencing a crisis?

No, I don’t agree with the idea that climate change has now become a climate crisis; it has always been a climate crisis or a climate emergency. And I think the scientific community tends to have a problem when it comes to communicating its ideas properly. Scientists involved in climatology spend their lives researching, while communication professionals focus their careers on how to communicate ideas.

It has always been a climate crisis or a climate emergency

What tends to happen, is that the media want to interview experts and the experts do not have the experience required to speak eloquently at length or effectively convey their knowledge. I think a group has now been created of people specialising in communicating climate issues and that is why we are now seeing expressions such as climate emergency or climate crisis, which have been created by experts to effectively disclose information. Yes, there is a climate crisis.

How do you see the future of the Mediterranean Basin and other regions sensitive to hydrological changes, such as the Indian subcontinent, at a time when water is about to become a market commodity?

There are areas, such as California, that are facing severe droughts. Things that we take for granted today, such as taps switching off automatically in public buildings, were not commonplace a short time ago; one had to switch taps off manually. This is a way of saving water. Think about hotels and how today it is normal for them to ask you to only leave towels on the floor if you need them to be changed. Is that to save money? Water? Or a bit of both? This is a win-win situation.In some areas we encounter problems related to irrigation. Gardens, plants that are not suited to the environment… In California, for example, native species are being planted. These are initiatives that can be implemented at a government level, but also at an industry and even a community level. However, ultimately, we may have to resort to desalination. This may be one option, although I am not entirely in favour of this technique, given its significant impact on the environment.

Is it true that combating climate change is a luxury that only developed countries can afford? How would you explain to the less prosperous citizens in developing countries that they shouldn’t use their highly polluting two-stroke engine vehicles to go to work?

Of course, but what is also true is that these are the people that are going to suffer the most as a result of climate change. And it is not just an issue of rich and poor countries. Within rich countries, there are also people -women, children, people of colour, less wealthy people- who are going to suffer the consequences, and we saw this during the initial days of Hurricane Katrina. If you had money, you could leave in your car. And those that didn’t have money, who were the ones that had contributed least to the problem, were not able to leave. So it is absolutely unfair.I like to use mobile phones as a comparison. Let’s look at developing countries. They didn’t go from rotary dial phones to a more modern fixed line and then to a mobile, they skipped straight to mobiles. And I hope developing countries can skip straight to cleaner technologies, without going through the intermediate stages.

Promoting sciences is a factor when teaching children about the importance of nature and the environment. How can we accentuate that interest?

Something I’ve noticed in the United States is that science is taught in institutes in the form of biology, chemistry and physics. There are no Earth sciences. Very often, students don’t start receiving geology lessons until university, therefore, I think people should focus on Earth sciences more, not just biology, chemistry and physics, and do so from an earlier age.

I work independently for a textbook publisher and the bestsellers are biology, physics and chemistry textbooks. And there is a particular book on oceanography which is the bestselling book around the world, but sales of this book are not the same as physics and biology books. Therefore, students are not aware of the value of Earth sciences because society is not aware of that value either. I have met researchers related to Earth sciences, who have said to me “I failed physics, so I chose geology”. It is a science considered to be less prestigious and for me that is horrible, senseless. Why should one field of science be less valued than another? Educators, institutions, parents… Everyone should get more involved.

Science is indeed fascinating. Do you think there are any emerging technologies that could help us combat climate change?

Absolutely. There are two huge problems: transport and power generation. Look at cars, they have been electrified in a decade. My parents believe in climate change, and when they wanted to buy a car, they bought a hybrid vehicle. And the reason is it cost the same, so why not do so. Then there are scooters, bikes… It is a change that is happening right now.Power stations are more problematic. When you build one, it lasts 50 years. Compared with a car, which lasts ten years. We have technology to create renewable energy, but… How do we get it to households? There is something known as the duck curve. There is solar power all day long, but people get home at six, seven or eight, and start consuming power as soon as the sun goes down… This is a problem.I made friends with the administrator at my power station, on purpose. Which is not as simple as snapping your fingers; it requires a number of hours to create that respect. He listens to me, I listen to him… The issue is that, for them, for the people running the plant, their greatest challenge takes place when people get home at night and put on the television. So the technology we need most urgently is some form of economic battery that can store solar power, so when people get home and start using their electrical appliances, there is not such a drastic change in demand. I believe this is a very important matter that needs to be addressed.

Can we win the battle against climate change?

Yes and no. You know the saying, you can lose a battle and still win the war? We will lose some battles. We are going to lose species, some areas will become flooded and will be lost. Hurricanes, typhoons, fires… Today, somewhere in the world, there is a fire or a flood and infrastructure is being lost. Can we win in the long term? All forms of life will disappear at some point. We are all going to die. Planet Earth has gone through five significant mass extinction events and we are in the midst of the sixth one. The question is, is it going to happen while I am still alive? Will it happen to the next generation or in a million years? I don’t know.

We will lose some battles. We are going to lose species, some areas will become flooded and will be lost...

I believe the human species will overcome it. But it could lead us to a situation such as the black death epidemic, losing two thirds of the population and finding us in a situation of having to start again, with a new mentality, with a new system of values, with a new way of doing things. The truth is, there is no way of knowing if we are going to win this war, but I firmly believe that just because we don’t know the outcome, we shouldn’t give up. We need to carry on fighting despite this.