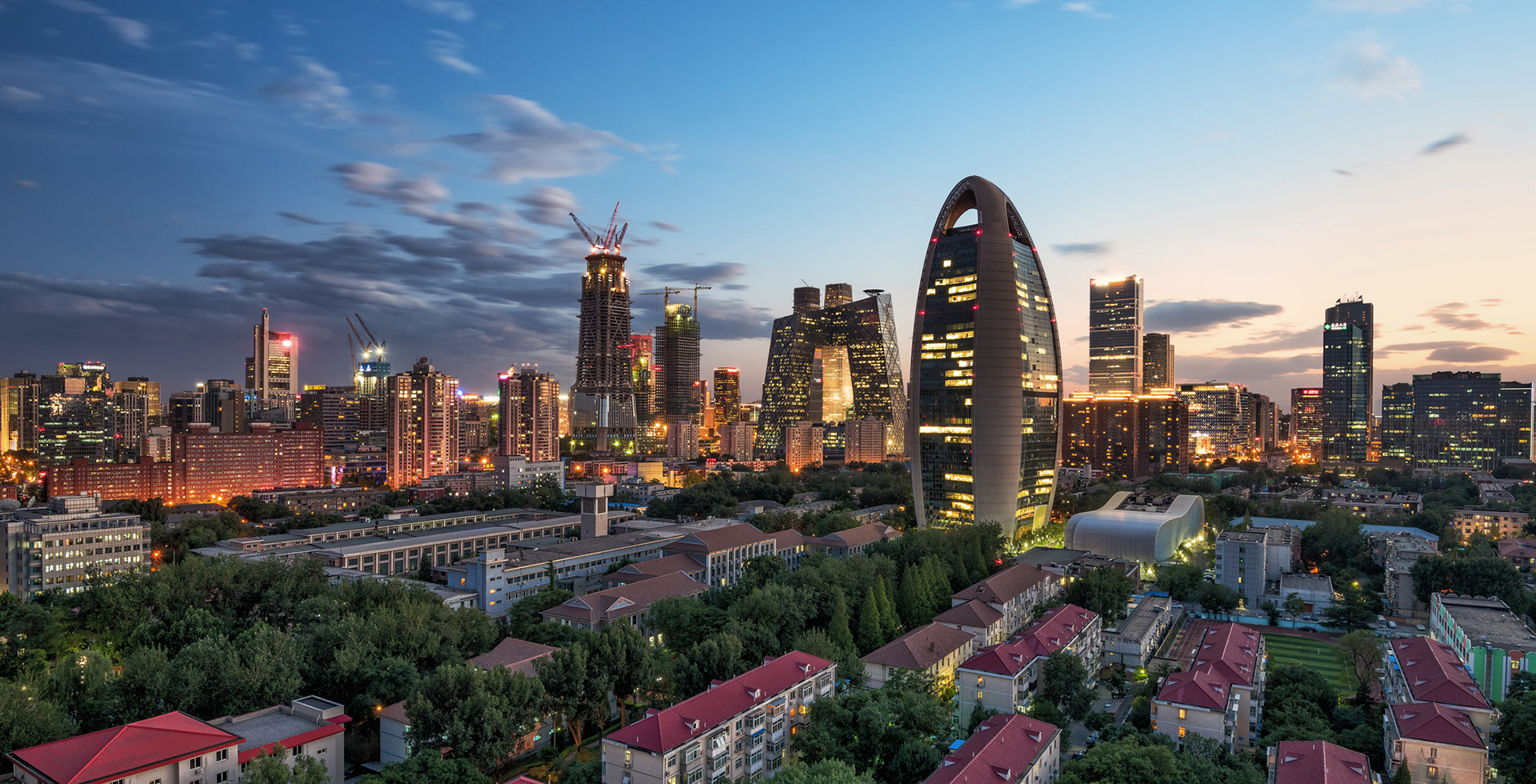 Author | Marcos MartínezCultural exchanges between people are a key and essential factor for any region to prosper, including cities. Historic examples illustrate that employability increased in cities interlinked by trade routes and, today, cities with larger population densities follow a similar systemic growth pattern. They create talent rather than attract talent.Cities such as Madrid in Spain, Peking in China or New York in the United States ,generate “geographic rifts” with respect to nearby municipalities, according to the economist Paul Collier, author of the best seller ‘The future of capitalism’ (2018). But, why in cities? Why are people attracted to them? How do they create employment? Why is most GDP growth found in cities?

A high density reduces the cost of services per citizen

Despite the cost of living in a major city being notably higher than in a small town, and that this involves higher salaries, which also results in more costs for companies, a large number of services find it reasonably easy to reduce their costs as a result of the high population density.One of the best examples of this is public transport, which tends to be more efficient and used more in compact cities. In European cities, arranged in concentric layers, we can see how the use of public transport increases as one gets closer to the centre. What impact does this have on employment?When companies based in cities such as Madrid, Peking or New York look for employees, the search radius is not only much wider than in a nearby municipality due to the permeability of public transport. They will also have a greater concentration of talent, regardless of which they are looking for, and urban conditions that enable timetables to be met.The same 35-minute 9.5-kilometre journey between Brooklyn and Washington Square Park on a high-frequency bus route (every 3 minutes), means 59 minutes on a low-frequency bus route (every 40 minutes) for the same length of journey just a few kilometres outside of the city.Transport, the presence of hospitals or the dense and consolidated business sector, are just some examples that show how companies established in highly populated cities can minimise their labour costs, have fewer workers arriving late, falling ill or not being able to resolve their personal problems, respectively; and, in turn, maximise the possibility of having more suitable candidates for the position and more cost effective despite the higher salary.

High density: services with improved support and quality of life

Before analysing whether cities create work or attract it, let’s first look at why a citizen in a small municipality would want to move to a large city. The answer has a great deal to do with the preceding paragraph, but this time analysed from the point of view of quality of life. 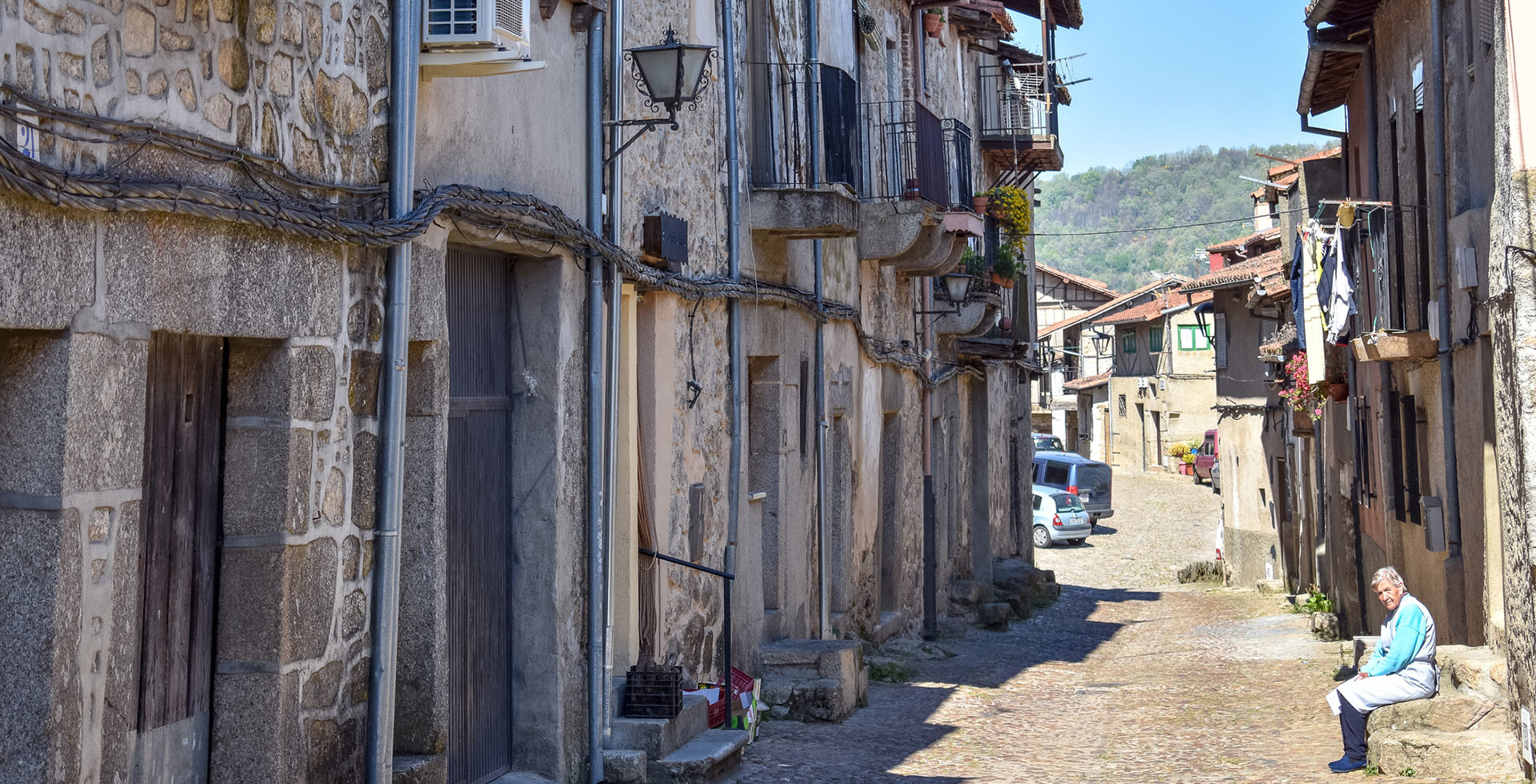 Just think about how often schools close in peripheral towns, those that still have a minimum and decreasing number of students. As rural depopulation and migration phenomena capture young people, the population pyramid is becoming completely inverted.The point is reached when, the town loses the school, forcing parents to take their children to surrounding towns. In 2018, The Conversation called it “The semi-rural problem”: the cost of establishing a school in a small village is ten if not a hundred times higher than doing so in a large city.The reason? The centre is more likely to fill-up completely in high-density urban environments, and the same happens with basic services such as healthcare, police stations, fire departments, etc. Towns that do not have these services have high personal costs for their inhabitants given the low public support.This is even more visible in smart cities, for which the CONUEE (Mexican National Commission for the Efficient Use of Energy) commented that “the information obtained enables energy consumption to be reduced, making the movement of people and goods faster and more efficient and increasing the quality of life of inhabitants, offering them a city with fewer uncertaintiesThese and other related and complementary reasons, added to the lack of work or the lack of a business network, make people go to cities in search of work. But, where does the work come from in large cities?

Large cities, do they create or attract work? 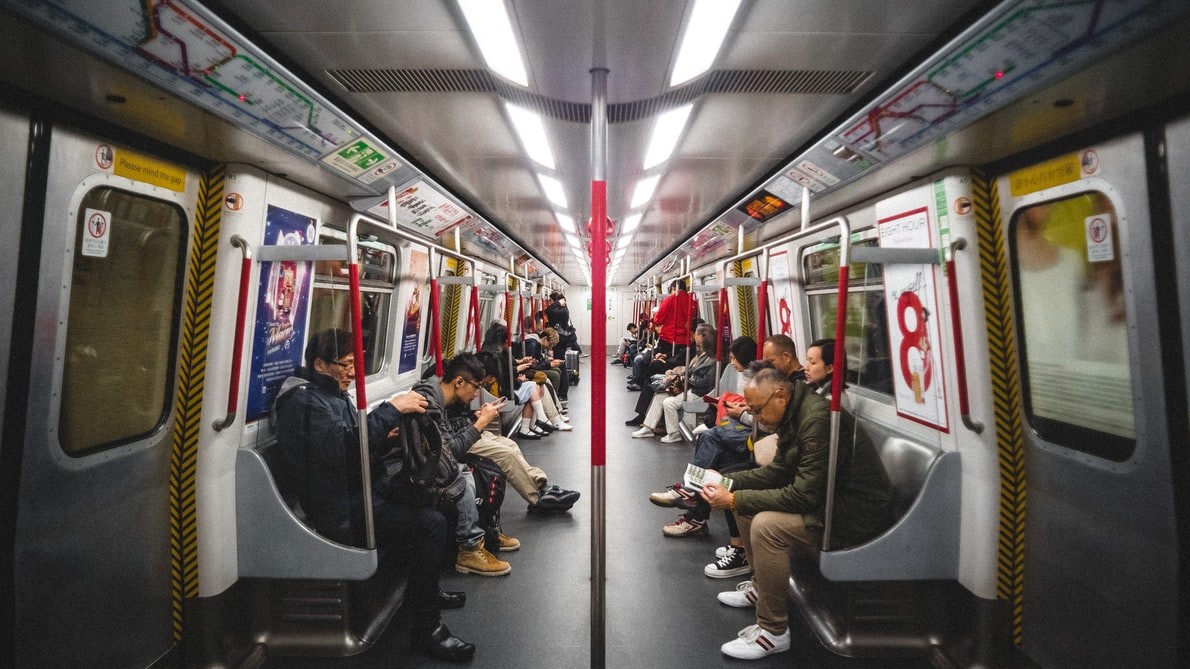 In the collective ideology, people move in search of work. However, a recent meta-analysis of hundreds of prior studies, has proven that the reality is much more complex. Although the studies seemed to be contradictory, researchers managed to separate the findings into two large groups.When referring to the economy in general, it would seem that people look for jobs in cities, therefore they move to them. In general terms, as we have indicated, a higher density of jobs leads to professionals moving to meet the demand, however, a large population does not generate a high work density.That said, what does happen, is that the better paid jobs follow the opposite pattern: quality jobs appear where there are lots of people. Large cities do not, therefore, only attract workers, they also generate talent due to the new interactions between people who, had they not coincided in such a reduced area, would never have coincided.This is important because, it relates the creation of innovation with urban density. It is not so much a case of large cities having more work (which is also the case, but low-skilled work), but rather the fact that large cities invent jobs, sectors, new technologies.

Where people come together, ideas emerge

Steven Johnson, in his book ‘Where good ideas come from: A natural history of innovation’ (2011) indicates that the agglomeration of human diversity in the initial cities was what accelerated innovation processes. Inventions such as the alphabet, the currency, roads, the wheel, the sail, etc. emerged simultaneously in dozens of cities around the world around 7,500 years ago. 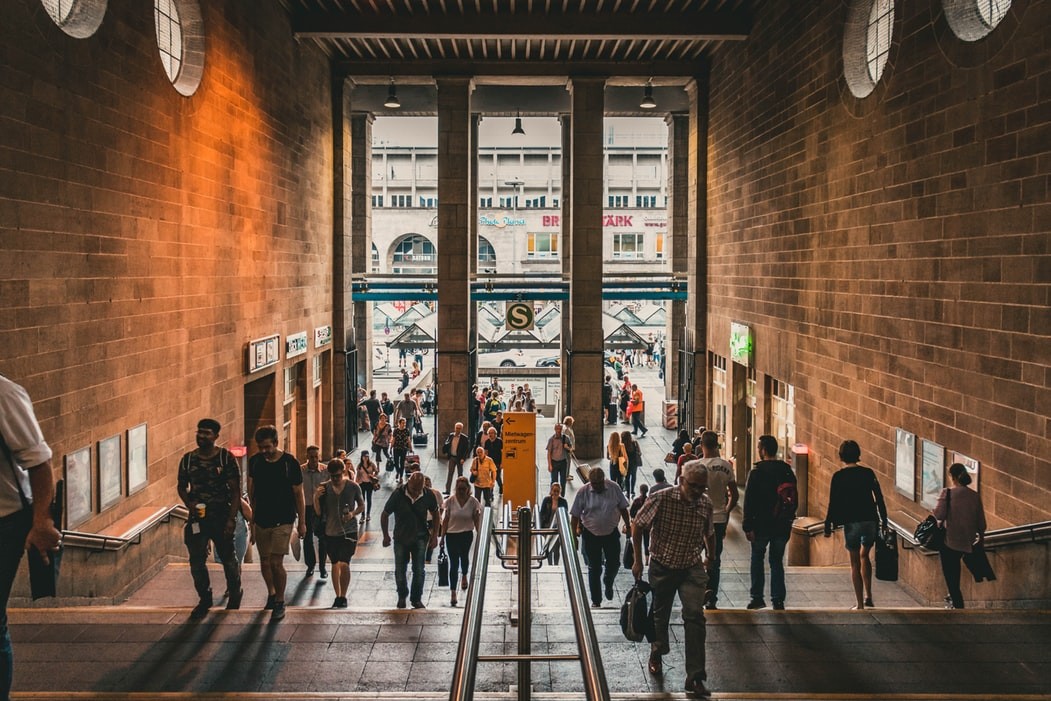 In 2018, a new study illustrated how communication routes (North American interstate highways) helped develop cities in the United States, limiting some of the problems seen further up in small towns. It would seem that, the speed at which people move (and “collide” with one another in a good sense, is a driving force.Nothing new. History has shown us how large and innovative cities appear in trade communication nodes, which is what occurred with the Roman roads in Europe, the Silk Road through Europe and Asia, or the Incense Route in Arabia.Likewise, “dense cities foster interactions between people, which leads to the exchange of knowledge, which so often results in new ideas or the dissemination of better practices”, according to the economist Adam Millsap (for Forbes).

Large cities attract low-skilled workers to cover positions at a better price than in other smaller municipalities, while highly skilled workers travel to cities to enjoy a better quality of life. As a result, the gross domestic product (GDP) balance is increasingly concentrated in high density areas.Like a black hole, which exists because it is a way of minimising the energy of local space, dense cities continue to attract people from all over the country because they optimise their quality of life and work. It does not matter what country we select. All, or practically all of them, follow the same pattern: 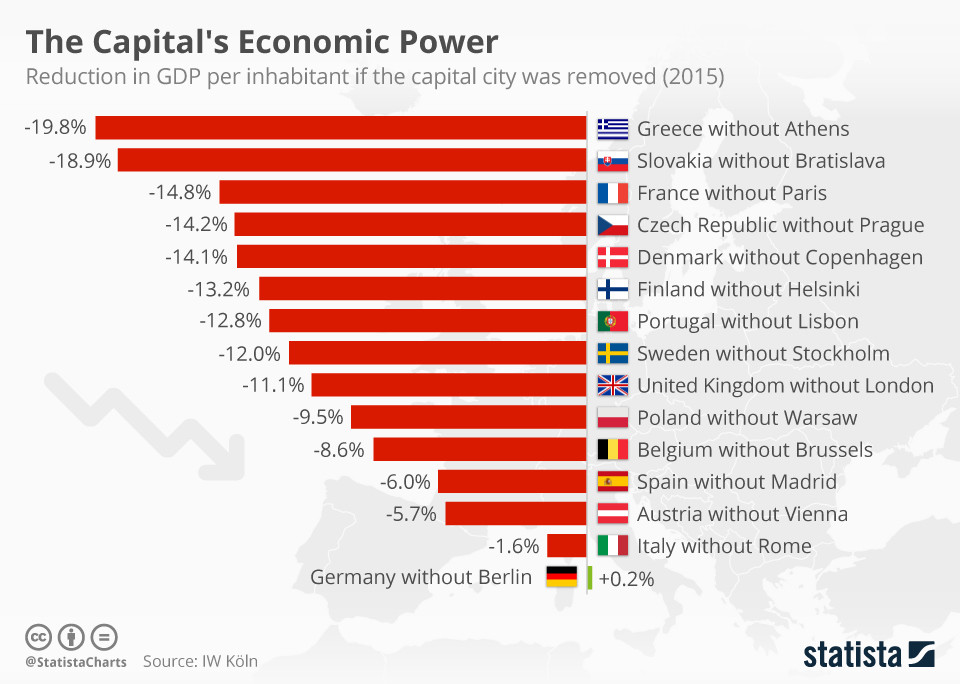 In the graph, researchers from the IW Köeln with the help of Statista, show how the GDP would drop in different countries if their capital cities were to disappear. The case of Germany is interesting, as Berlin has a GDP deficit compared to the rest of the country. But, in general terms, large cities tend to accumulate talent, create quality employment and increase the GDP.All these answers respond to the question at the beginning of the article. How come cities such as Madrid, Peking or New York have more jobs? It is due to the interaction of people in a high population density environment, innovating in the process and accelerating migration; with the complete reverse occurring in municipalities with smaller populations.Images | iStock/bingdian, iStock/dhdezvalle, JC Gellidon, Christian Wiediger