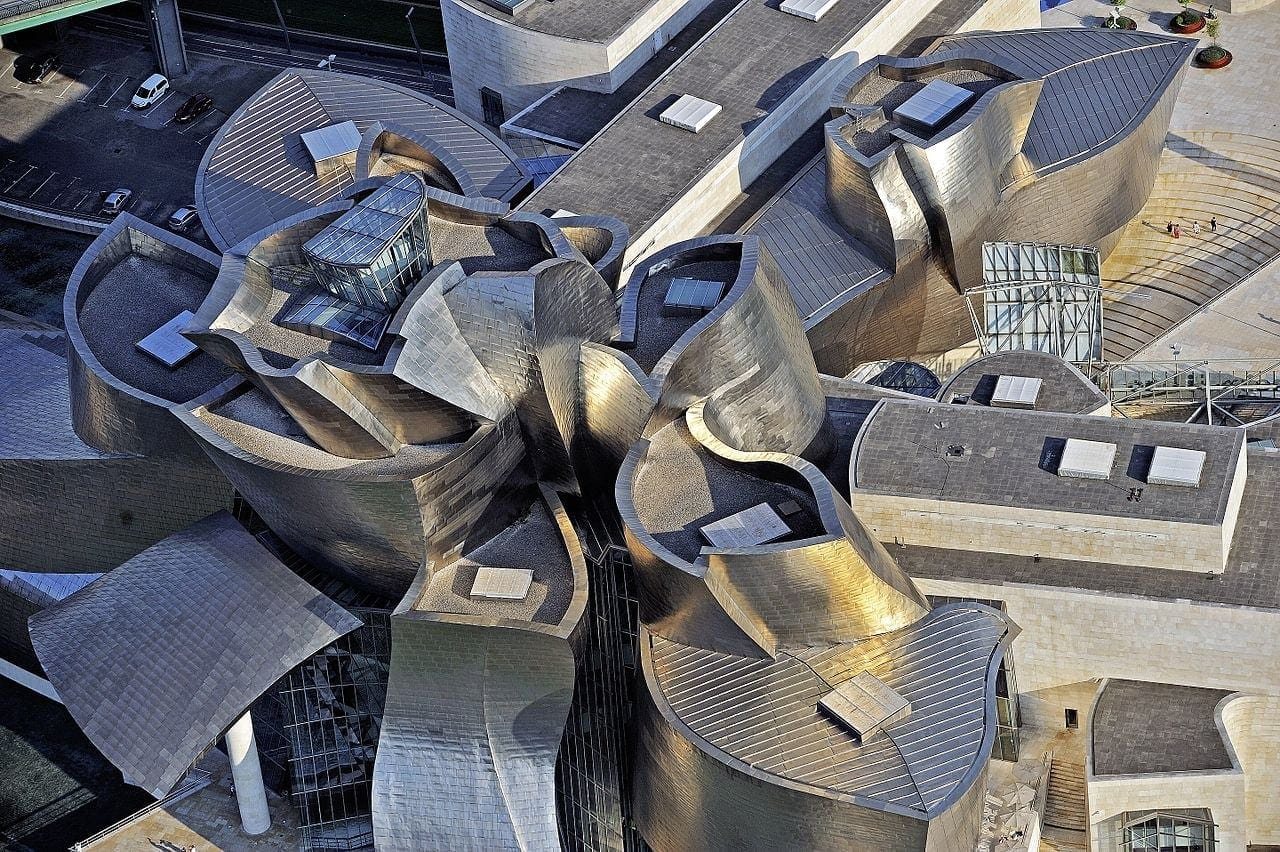 The Guggenheim Museum Bilbao (Spain) is renowned for its innovative architecture and the beauty of its designs. To such an extent that it has served as inspiration for architects across the world and it has been used in countless science fiction movies. Although its futuristic design is not the only relevant aspect of the building that put the city in which it is located on the map. Here are 9 reasons why it deserves its global recognition.

Why is the Guggenheim Museum Bilbao famous?

The Guggenheim Museum Bilbao has won over 70 international awards for so many different aspects than one may imagine. Although many of them are related to its design, the way in which it was built or the way it operates on a daily basis, it has also won awards for best website, Mérito a las Bellas Artes (Gold Medal of Merit in the Fine Arts) award, an award for lighting, global accessibility, CSR, Women's Empowerment or web accessibility among many others.

Some amazing facts about the Guggenheim Museum Bilbao

Below are a few of the most interesting yet little known facts about the museum. These include:

There were also numerous Guggenheim museums in Berlin between 1997 to 2012 and in Las Vegas between 2001 and 2008, which were closed by the foundation and there were various attempts to open museums in Guadalajara (Mexico), Vilna (Italy) and in Helsinki (Finland), that never materialized. There are currently two more in the planning stage: Abu Dhabi and an extension for Bilbao.

The shell that covers the museum is made up of around 33,000 thin titanium sheets which, according to the museum organizers, "provides a rough and organic effect, adding to the material's color changes depending on the weather and light conditions".

According to Juan Ramón Pérez, Site Manager of the Guggenheim Museum in Bilbao, "titanium was chosen because of it marvelous resistance to corrosion, durability, solidity and its incredible range of tones depending on the intensity and reflection of the light, which allows its color to change from dawn to dusk".

There is no doubt that the choice of color and shapes were ideal for the presentation of the building, which changes the visual aspect of the building as the day goes by. 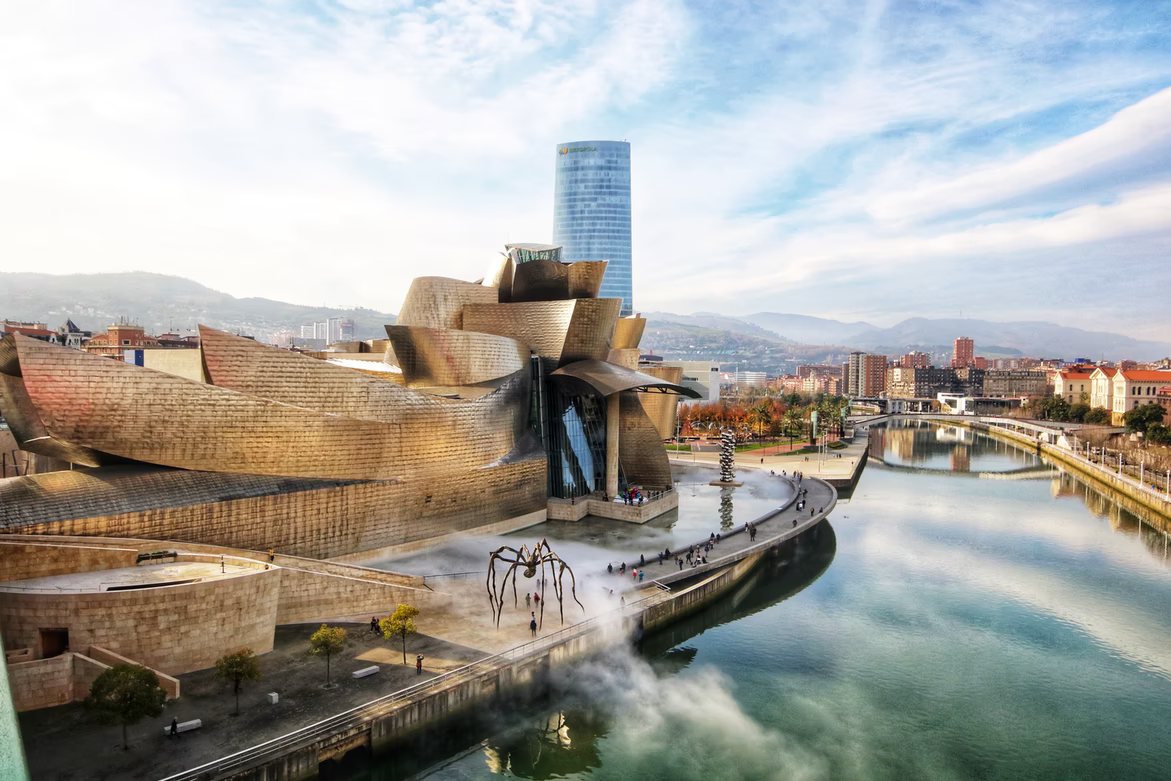 Farewell to the old industrial zone

Bilbao is an example of a city that found the way to renew itself in time ---unlike previous industrial cities like Manchester or Detroit that failed to have that vision, and which took around twenty more years to do so--- and the Guggenheim was key for this. The area in which the museum was built was an old industrial site that was rapidly declining, and which found the way to re-emerge as a cultural hub. The previously devalued area has made Bilbao a global leader in culture.

The facades of the Guggenheim museum in Bilbao are irregular and, therefore, they cannot be cleaned using conventional cleaning hoists. Instead, a team of professional rock climbers are in charge of brightening up the building every now and again.

A computer-aided design ahead of its time

Today it is common, if not universal, for all public building designs to be created using BIM software. However, when the building was designed at the beginning of the 1990s, digitalizing the structure and using CATIA was unheard of. This program had been used in the French aeronautical industry and it was the best software of its time. 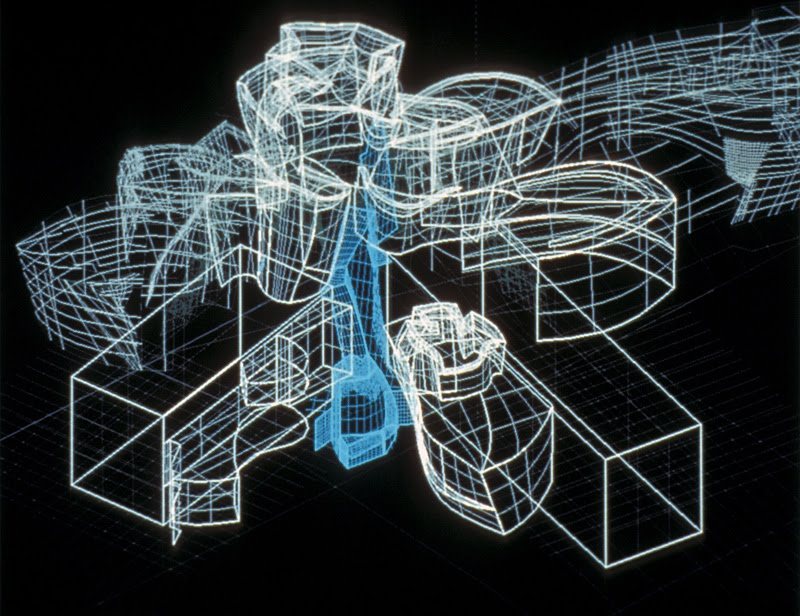 A unique skeleton in its class

The previous image illustrates the technical complexity of building the Guggenheim, a museum in which not a single facade is the same as another. The truth is that it took not only the use of a software that was ahead of its time, but also technicians who discovered new ways of working with apparently common elements such as steel profiles. The same applies to these, no two sections are the same, which posed a technical challenge. 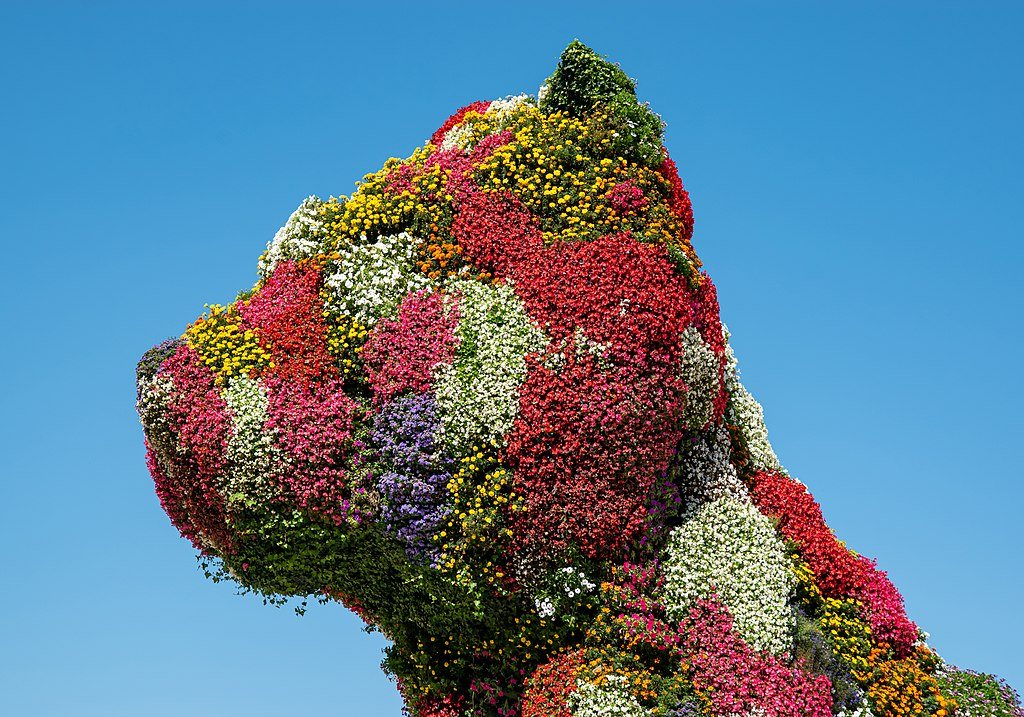 Puppy is a 12-meter tall dog covered with thousands of real flowers. A team of gardeners is responsible for looking after it and decorating it according to each season. A complex system of nutrients feeds the flowers from inside. Puppy is the second creation of its kind by Jeff Koon. The original Puppy is in New York. 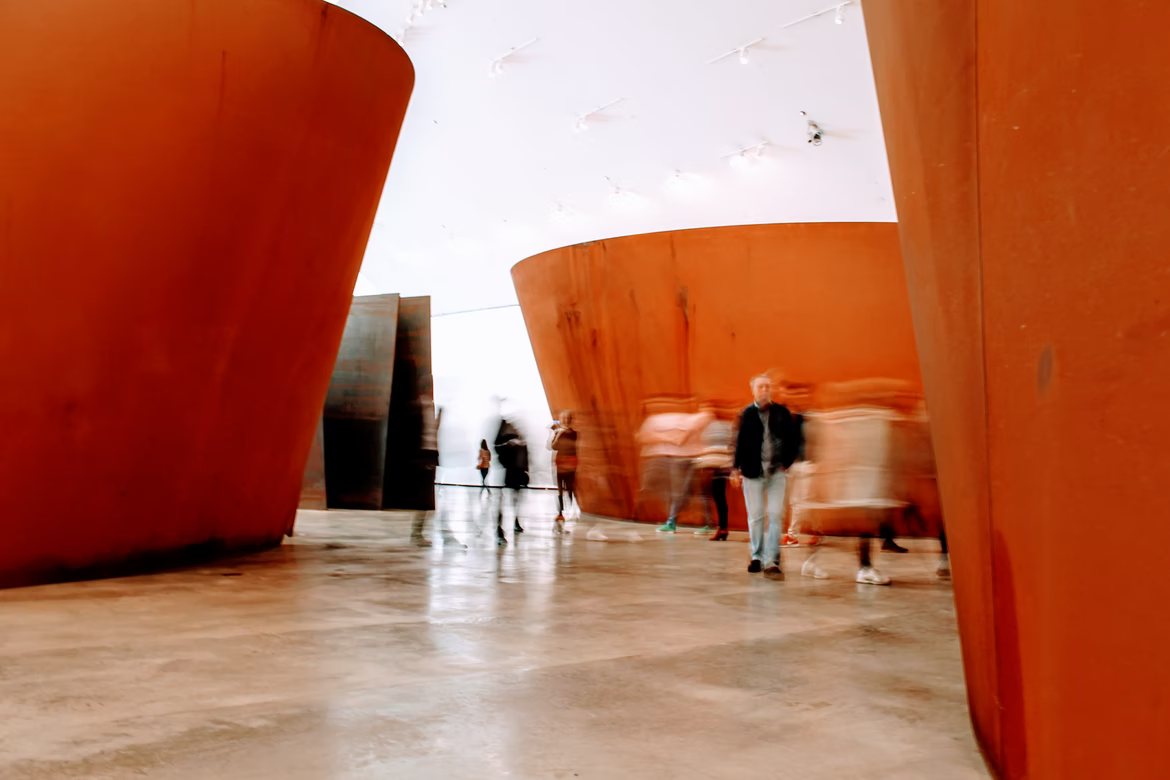 Guggenheim Museum Bilbao is a contemporary art museum and, at the same time, art itself. Its works of art are objects requiring exceptional lighting. Although this is an aspect of vital importance for all museums around the world, the Guggenheim gives it utmost priority. In fact, it has received numerous international awards thanks to its interior lighting.

Around fifty maintenance and cleaning technicians work in the Guggenheim in Bilbao on a daily basis. Without them, the system would simply not be able to operate. "There are 7,500 light points and over 2,000 power sockets", according to Óscar Rábade Romero, Head of Cleaning and Maintenance in the museum, "which means there are probably 5,000 m^2^ of technical rooms and corridors".

The Guggenheim Museum Bilbao is a fascinating machine, and it is absolutely understandable why other countries have tried to copy its design. As with Puppy, it not only guards the art within, but rather it cannot help but form part of the global gallery.