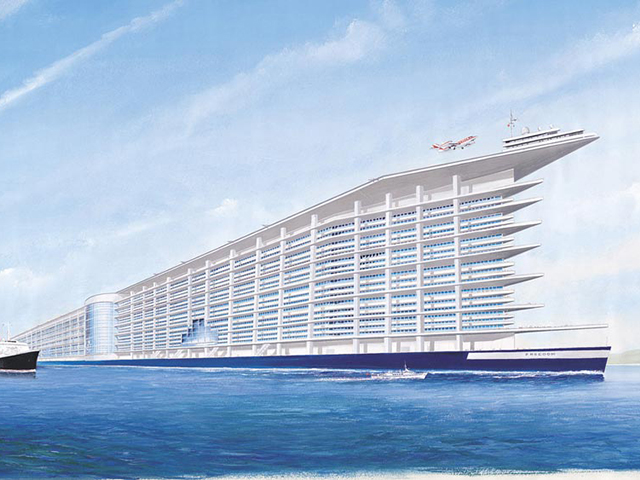 The idea of creating a floating city beyond the reach of the laws of existing states is quite an old concept and has given rise to numerous projects, most of which were never completed or did not even get off the ground. The Freedom Ship is one of them, presented as an alternative to land-based cities. As with the latter, it would be made up of homes, streets and urban structures that would accommodate all types of stores and services just like those found in any other city.

It is not a cruise ship like the Freedom of the Seas and others, according to the project's website, but rather a unique proposal to live, work, go on holiday or plan your retirement in a city constantly moving around the world .

What is the Freedom Ship megaship? 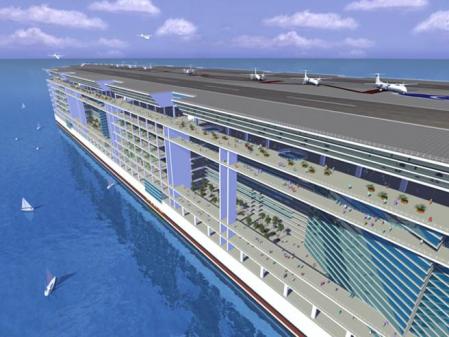 Designed by the engineer Norman Nixon at the end of the '90s, the Freedom Ship is a 25-story high megaship that is 1,371.6 meters long, 228 meters wide and 106.68 meters high. It was designed to bring together an "international, cosmopolitan and self-sustaining" community, and would circumnavigate the globe every three years docking at the main ports around the world.

The construction of the ship has experienced countless delays, due mainly to cost-related issues, with estimated costs of €10 billion and the obvious difficulties involved in building a 'marine monster' of its kind.

As with any exceptional project and with a somewhat utopian vision, the Freedom Ship, on the one hand, proposes a series of very interesting concepts and, on the other, it fails to resolve another series of issues, casting serious doubt on the feasibility and even the legality of the project. 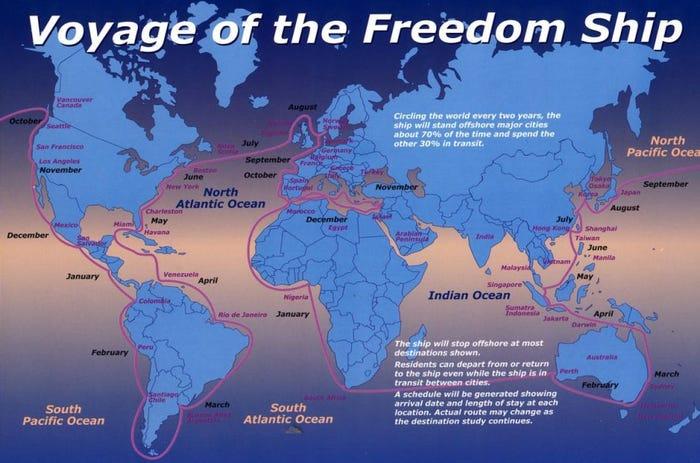 Those responsible for the project emphasize concepts like "community" to transmit the idea that class differences will not exist in areas such as health or education, which will be the same for all students from preschool to university level.

Those who hate routine will feel at home with the international nature of the Freedom Ship. The megaship promises to circle the world every two or three years, docking 70% of the time on the outskirts of ports in countries such as Morocco, Nigeria, Australia, Spain, Venezuela or Brazil.

The megaship's essential services and infrastructures would be shared by all passengers, who will pay a fixed fee to maintain essential personnel such as security personnel or firefighters.

Retirement homes, hospitals, offices, restaurants, track and field facilities, casinos... The Freedom Ship has everything one would expect from a city without having to move. 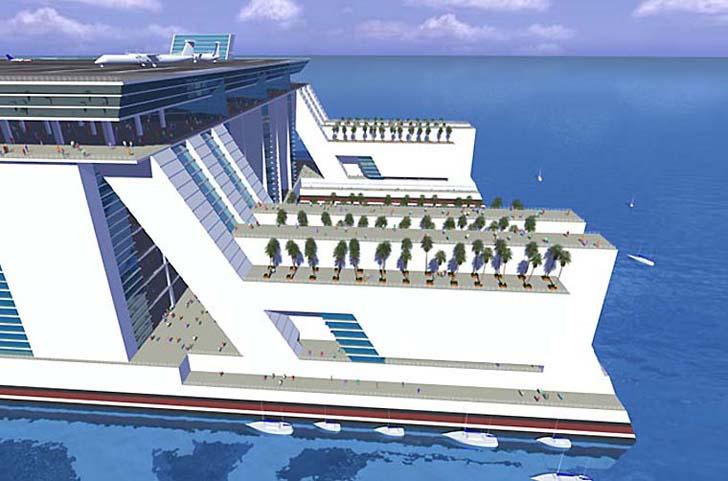 The project developers claim that the Freedom Ship will be governed by international maritime laws and the laws of the nation whose flag it is flying. However, it is not clear which jurisprudence, security body, etc. would be responsible for ensuring compliance with such laws.

Another issue related to the above: where would those working, living, visiting or acquiring products on the Freedom Ship pay taxes?

Another matter yet to be clarified is whether or not visas are required and if they need to be renewed during the months aboard the Freedom Ship.

How much would it cost to build the Freedom Ship?

Various sources believe the construction of the Freedom Ship would cost around $10 billion. Moreover, it has never been appealing enough among potential investors to reach the estimated figure, although it is not known how much they have managed to secure until now.

In 30 years, at least three designs for the Freedom Ship have been submitted and the start of its construction has been announced on numerous occasions (one of the last times in 2013). However, there is very little news regarding any form of progress.

Will it ever be built?

This leads us to the next question: will we ever see the Freedom Ship set sail? It seems difficult. Nixon, its most fervent supporter died in 2012. Also, the entire Freedom Ship International management team has changed in recent decades, further weakening the project's stability.

The megaship's construction date has not been officially announced, or where it would be built and who would be in charge of it. Too many questions for a Utopian project but which lacks the basics in order to be executed. For now, at least.