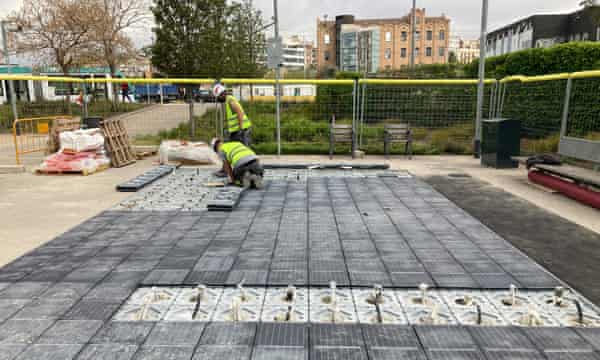 Barcelona city council has installed Spain’s first photovoltaic pavement as part of the city’s drive to become carbon neutral by 2050.

The 50 sq metres of non-slip solar panels, installed in a small park in the Glòries area of the city, will generate 7,560kWh a year, enough to supply three households.

The city has contributed €30,000 (£26,000) towards the cost, the remainder being met by the manufacturer. The viability of the scheme will be assessed after six months. “We’ll have to assess the wear and tear because obviously it’s not the same as putting panels on a roof, although they are highly resistant,” says Eloi Badia, who is responsible for climate emergency and ecological transition at Barcelona city council.

“As for cost benefits, with a pilot scheme like this it’s difficult to know yet how much cheaper it would be if it were scaled up. We’re keen to install more on roofs and, if this scheme is successful, on the ground, to power lighting and other public facilities.”